Oracle After Hours: The importance of uncensored media 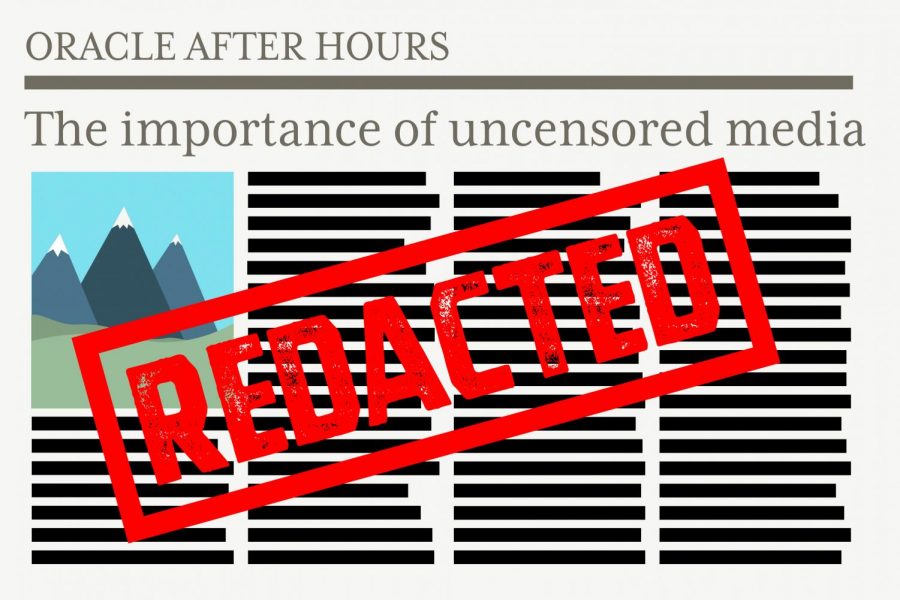 If you have read any of my previous columns, I am sure you know that my dad and I love watching movies together. Last weekend, we took on a pretty intense movie entitled Spotlight released in 2015. The movie Spotlight follows a group of four journalists working for the Boston Globe. Bringing to light the power of free press, this movie highlights the importance of uncensored media in the face of one of the most powerful entities in the world. This got me thinking about just how important it is that the media is uncensored.

The American Civil Liberties Union (ACLU) defines media censorship as the suppression of speech, public communication or other information. One of the ACLU’s mandates is to protect free speech in the United States.

Even in places around the world such as China with strict regulations surrounding censorship, there are always ways to find out the truth. In an article entitled “The Psychology of Media Censorship,” Patrick Mattimore, a writer and an adjunct-professor at Temple University/Tsinghua University in Beijing, China, shares his experience during his time living in China from 2009-2012. Mattimore writes that when the Chinese government is not in favor of what a messenger has written, it will completely black out the site. He also explains that in countries like China and Thailand (that have very strict censorship rules), people often find ways around the barriers, albeit illegally.

“It’s very difficult to censor the media or silence people, as social connections will most always find a way around it,” Mattimore says.

I agree with Mattimore’s statement 100 percent and think that it holds a lot of truth and can relate to our lives in the present day. Our Constitution’s First Amendment allows the right to free speech and free press. During the pandemic especially, we have seen this right being exercised.

On May 25, 2020, a video that was 8 minutes and 46 seconds long, showed George Floyd, a black man who was pinned down by the knee of a white police officer, struggling to breathe. He died as a result. With social media and traditional media coverage of George Floyd’s death, millions of people around the world witnessed an example of systemic racism in America. While certain United States and state government officials may not have been happy that the video was so widely distributed, here in the United States, there is nothing they can really do about it. The outrage that followed reignited the Black Lives Matter movement.

Unfortunately, there are some drawbacks to having uncensored media. One issue is that many media companies in the United States are run for profit, which means more viewers, readers and downloads matter. As a result, media companies are incentivized to promote news stories that are popular, even if they aren’t true. In fact, according to an analysis released by NewsGuard, unreliable news has increased its share of social media interactions this year and more than doubled since 2019 (now at 17%). How we balance free speech with uncensored media will be an important topic for us to manage as a country going forward.

With all of this said, I am extremely grateful for the opportunity The Oracle grants us here at GBS. Writers are allowed to speak their minds with no censorship and can openly talk about controversial topics. Presenting these uncensored, and potentially controversial stories helps to promote a more vibrant discussion within the student body and the wider GBS community, which benefits us all.