Oracle After Hours: Fast fashion is hurting the environment, here’s what you can do 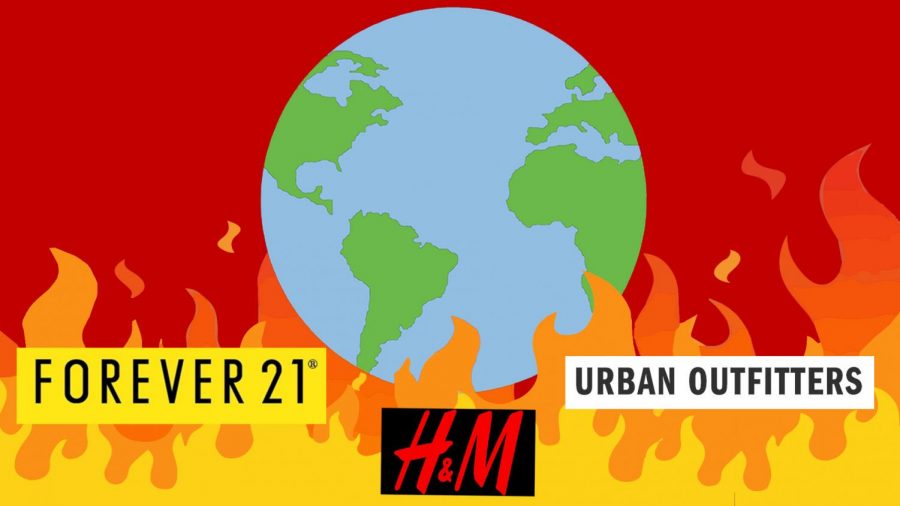 The year I was old enough to go Black Friday shopping with my older sisters was the year that I unlocked a whole new world. After daydreams of shopping at Old Orchard, finally being able to go was a sweet treat.

You never really know that electric feeling until you have a heaping amount of shopping bags digging into your forearms while flying through countless racks of clothing. Weirdly enough, shoving your babysitting money into the hands of overworked cashiers is a lot more fun than it seems.

“Fast fashion” is the term used to describe cheap clothing that is produced quickly and unethically by mass-market retailers in order to respond to the latest fashion trends. This clothing is usually produced in countries such as China, Bangladesh, Vietnam, and other places where there are few labor laws and humanitarian regulations.

Now I am not here to make you shift uncomfortably in your clothes right now, because I am no saint when it comes to avoiding fast fashion and I don’t expect you to be either. I still wear all of the clothes I purchased in the past from Forever 21, H&M, and Urban Outfitters and that is okay. I am just here to hold your hand into the even shinier world of sustainable fashion.

One of the many beauties of eco-friendly fashion is the way we perceive clothing. When we slip on a shirt in a dressing room, our gaze most likely falls on the price tag or how long it will be in style. But I think we should validate our clothing just a little bit more and start thinking of it as valuable pieces that we are so lucky to have.

Another lovely aspect of clothing is that it can voice a million things about you without even peeping a sound. Trust me, coming from a pretty shy kid, clothes are our chosen skins and the way we can express what we’re sometimes scared to say out loud. It’s difficult to admit how much I value other people’s perception of me, and one of my worst fears is being seen as too loud and outspoken or too quiet and boring. A lot of the time I just resort to saying nothing at all. Classrooms as well can be one of the most intimidating places to show self-expression but I think mixing colors and patterns with my outfits has helped me show that even though I can be timid, I’m actually a pretty vibrant person once you get to know me.

Now you’re just one person in the vast world of economic consumers, so does it really matter if you just keep living your life as usual? It is incredibly easy to justify our means by the actions done by everyone around us. But I don’t think that’s necessarily fair to the 1,134 workers that died working in the Dhaka Garment factory in 2013. The manager’s refusal to hear his worker’s concerns, caused the fast-fashion factory to collapse after years of crumbling. The tragedy spiked outrage, causing many big-name retailers to advocate for changes; many of which were hollow promises.

After many uncomfortable hours of educating myself on the effects of this massive industry, the sweet treat of new clothes flooding my closet now left a rather bitter taste in my mouth. Although the very nature of this fundamental industry may seem all doom and gloom, I promise the alternatives to the epidemic of fast fashion are equally as amazing.

Thrifting has probably crossed one of your social media streams one way or another, and the hype around it is pretty enormous. I will tell you it’s as amazing as it sounds. Searching for unique vintage pieces in the multitude of Goodwill racks can be a bit tedious, but trust me, those one of a kind pieces are so worth it.

If time is an issue when it comes to ethical clothing, platforms such as Depop, Thread UP, and Poshmark are also great options for more organized eco-friendly shopping.

Now I would never tell another person how to live their life, but I would ultimately encourage them to consider the unjust labor that went into making that $4 shirt and if it was really worth that fleeting moment of joy.