one story out of many 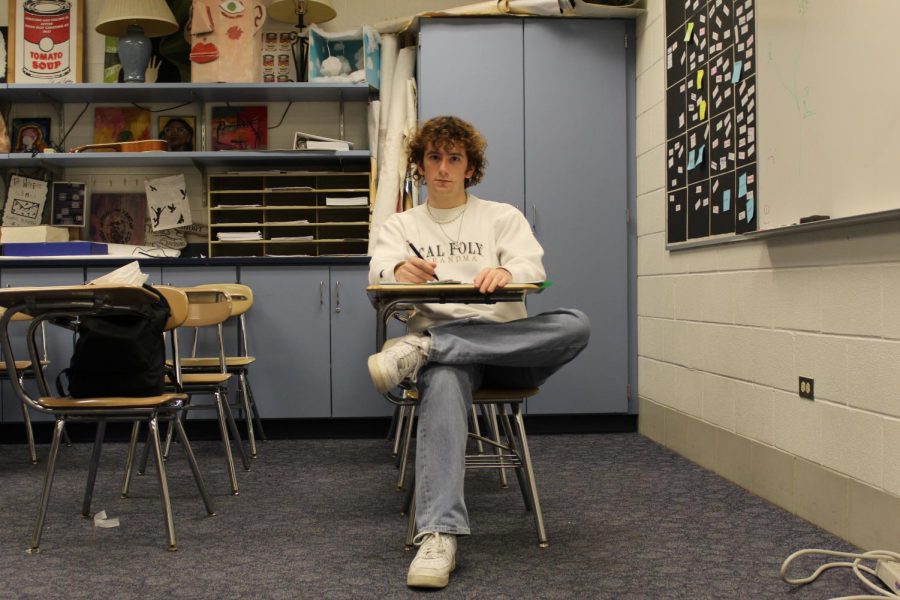 A trigger warning is a statement cautioning content that may be disturbing or upsetting to some readers or viewers. In a classroom, students may view trigger warnings as explicit tips regarding material they are about to be exposed to in class. In this article, please read cautiously as The Oracle describes the effects of trigger warnings.

The room was dark except for the light of a projector shining towards the front wall, pencils tapping across wooden desks while a wave of unease filled the classroom. Junior Carter Lewis* felt the corners of his eyes water as he shifted uncomfortably in his chair. Looking around, Lewis watched as students hid their emotions under the security blanket of their blue surgical masks, as the word “Depression” lingered over the screen.

He struggled to listen to his health teacher discuss depression symptoms. Lewis wished his teachers valued the importance of incorporating trigger warnings into the health curriculum the way he does. With a diverse student body, certain lessons can lead to personal conflicts and can cause discomfort due to one’s own negative experience.

“I sat in the back of the health classroom, struggling with the fact that while I could physically get up and leave without being followed, the other students in the class may see me as sensitive or weak,” Lewis said. “[This prevented] me from leaving [because of] the video that was causing me severe discomfort.”

Lewis claimed that building a dynamic of trust between students in the class can provide a safer environment for covering potentially loaded topics. Although Lewis said his teacher offered a brief warning, he believes approaching the lessons with a survey could provide more relief to these subjects.

“I would [suggest] Google Forms to fill out throughout the semester about certain topics that may be triggering,” Lewis said. “Just for the teachers to be able to tell which students may struggle with what topics.”

Health teacher Laura Duffy finds trigger warnings to be extremely necessary because  she wants to make sure her job is done right because of her past experiences.

As a teenager, Duffy said that lessons she was taught in high school weren’t carefully put together, convincing her to want to be sensitive to students’ needs.

“We [give trigger warnings] because it’s the right thing to do,” Duffy said. “We don’t do it because somebody came and said you need to do [it] this way. It just makes sense for a health curriculum.”

While some South health teachers offer trigger warnings in classes, there is no written regulation concerning caution to sensitive topics, according to Duffy. However, she said it is an unwritten rule that teachers should preface class with warnings for their students. Without the knowledge of what would be a triggering topic for every student, Duffy said it is easier to give daily warnings.

“[Trigger warnings are] in our powerpoint and our slides presentations,” Duffy said. “Our last [and first] slides of the day will say a reminder of what we’re doing next class. I wouldn’t want somebody to just skip that slide, so [we’ve] got it in both places.”

In the event that a student is worried about an upcoming chapter in the curriculum, Duffy utilizes a process dedicated to helping students through their hardships. Her approach to these events consist of either assigning the student a plan to leave the classroom and work on the material by themselves, or find a different topic to create a project on.

“If a student saw something coming up for next class [that worried them] and they hung out after class, we would talk in the hallway,” Duffy said. “I would explain what the class is going to cover, or I would try my best to give them a pretty good idea of what to expect. Then I would say, ‘How do you feel about that?’ [If they feel uncomfortable] I would write [them a] pass, so they can come swing in and see me, then they would go see [another] teacher. Some students go to the TLC.”

Senior Matthew Garvey experienced an uneasy moment in the health classroom.  During class he recollected difficult memories while his grandma had gone through stages of cancer. Visiting his loved one in the hospital and worrying about his mother’s heredity were two triggering elements of his connection to cancer. These moments caused him to feel flustered during the lesson. Despite Garvey taking health during the pandemic, it was his first exposure to sensitive topics, being taught in a classroom, and thought warnings should not be as brief in the near future.

“I had a personal connection because a lot of people in my family have a genetic history of certain cancers,” Garvey said. “That was something that was personal for me. [However,] I think in a way you couldn’t give a warning about it, because the way it works during [remote learning], it’s definitely different [than a normal year].”

As teenagers, Garvey admits everyone might feel discomfort during health class, and people expect adolescence to act mature around unsettling topics. He hopes South can find a way to be more sensitive to teens’ perspective of survival through sensitive experiences.

“Taking the time out of class and explaining why this could be triggering or why this is important to teach [a topic] can seriously affect some people’s lives,” Garvey said. “I feel like it’s not normalized like it should be, ‘Everybody take this with a grain of salt because this is a subject that’s more adult, or a sophisticated topic.’”