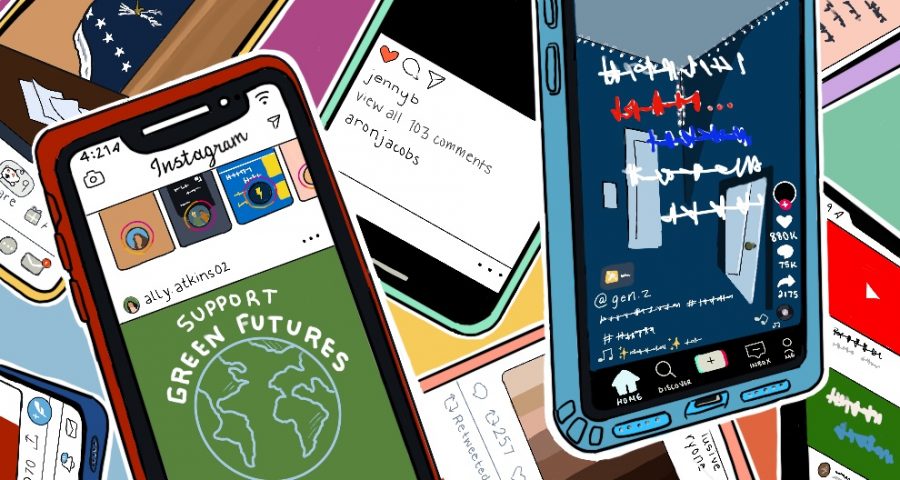 Scrolling through my Instagram feed, I see the red story bubbles of many of my peers’ pages. With one click, my screen opens up to a post on the importance of voting for the upcoming elections; with another tap of the screen, I come across the benefits of wearing a mask. From a global pandemic and political uprisings to natural disasters and celebrity deaths, 2020 has by far been one of the most bizarre years of our lives.

In light of all recent events, countless celebrities and teens have been seen speaking out about current issues, such as police brutality or politics like the current election. These types of communication have primarily taken form through social media outlets, such as Instagram and TikTok. Not only have individuals been using such platforms to speak out, but the film industry too has taken on this role in commenting on social issues. With all this change in our society, we have found a way to unite ourselves through these difficult times, that being the media that surrounds us on a daily basis.

These past few months, I have witnessed a great deal of activism arise on social media, with some focusing on politics in light of the recent election, while others have posted petitions to highlight societal issues, such as police brutality. Of course, the infamous pandemic has made its way onto my feed as well.

Seeing those close to me post about societal issues is a great thing. School has taught students the basics of politics, like how our government is run and what aspects make up the three branches. These things are important for us to know as American citizens, but I have never been truly aware of politics until recently, with the surge in social media posts.

Through the many resources my peers and other teens in the U.S. have put on their stories or spoken about in videos, I have seen a lot of the same resources being repeated on my feed. Watching teens interchange resources has made me see the unity that this activism has created and acknowledge the importance of banding together during these times. We help each other understand the issues in our society, which will further allow us to step closer towards change.

Along with acknowledging aspects of the society and politics, many individuals have geared their social media to spreading awareness on the pandemic. I have seen posts about how to stay safe, things to do during quarantine and even fun mask designs to encourage more active mask-wearing among individuals. Thus, it is clear that this global pandemic has taken a toll on our daily lives, but with Gen Z speaking out and banding together to “slow the spread” has motivated many others to do their part to educate themselves on the virus.

In the past, social media has had a history of causing extreme division amongst its users. With the recent trends in posts, however, this division and sense of separateness has been mended, bonding many individuals together for a good cause. Gen Z has tirelessly been working to change the negative connotation associated with social media into something positive and empowering, and I’m all for it.

Along with platforms online, movies continue to make an impact on society. On social media, we have seen activism but films speaking on social issues really tend to speak to people and open their eyes. Many films relating to current societal issues have made an impact among their teenage and adult audiences.

Films can convey such a powerful message to the audience through various impacting storylines, as can be seen with the productions of “The Hate U Give” and “Hidden Figures,” both of which tackle the prevalence of racism and sexism in American society. By opening people’s eyes to their world around them, films possess the astonishing ability to change an individual’s perspective. With all these new ideas, we can then start building towards reform and thus translate our impact on modern-day society.

In these unprecedented times, have been changed into what we now know as our “new normal” – computer screens, online PDF files and Zoom calls. It is imperative that we recognize that times are changing now more than ever, but we must work to band together to reform society for the better.

Behind every story bubble on Instagram and every film on Netflix, is one step closer to achieving this change in society, and it is up to us to activate that change.