From birth charts to constellation patterns, your destiny is written in the stars 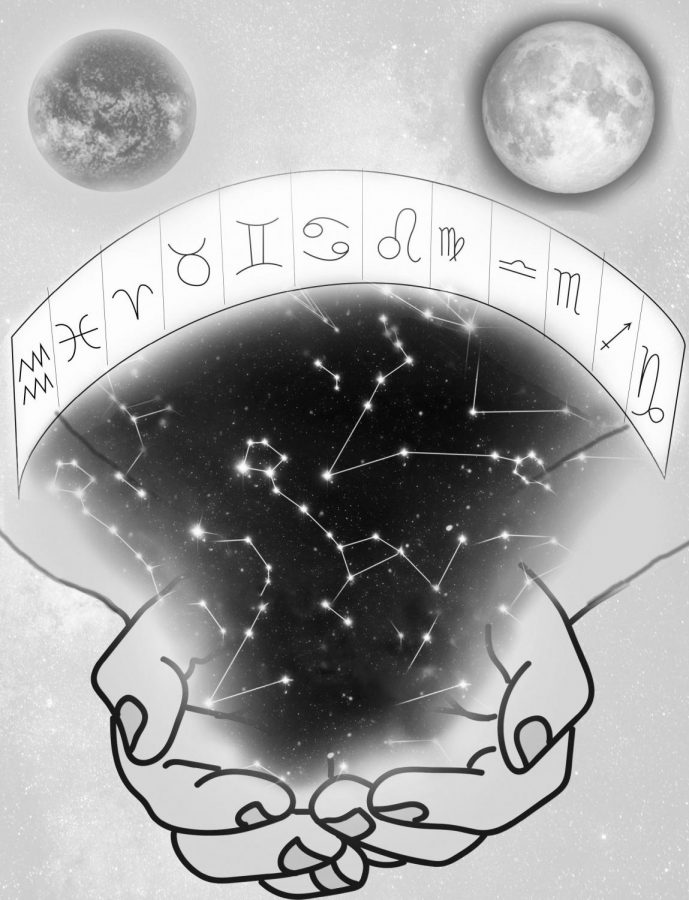 The power of the universe is limitless. Don’t believe me? Well, take a look at a book or two lying on a nearby shelf in your home. The story you’re reading, the pages you flip through, the words that catch your eye; none of that would’ve been made possible without the paper shed by innumerable trees, or the ink crafted from the altering of soybean oil and others of such nature.

Still unconvinced? Try taking a walk outside on an early spring or mid-summer day, but this time, without anything found naturally in your path. A lot harder than you’d expect. The plush grass, fluffy clouds, warm sun, even the gentle clamor of a neighboring playground: all linked to one source.

My point is, the universe is responsible for a lot more than it is accredited to, and I’ve always intended on spending the rest of my life studying it.

Ever since I was given my very first “Children’s Atlas of the Universe” at age six, I was convinced that my destiny was written in the stars, or, rather the study of it. The vibrant colors and geometric shapes of the galaxies and planets that filled the pages fascinated me. To further this passion, I wanted my very own telescope, like the ones in the magazines I desperately pointed to whenever I sat down with my dad to create my Christmas wish list.

“Why pay that much money when you can just go outside and look up at the sky?” He often replied to my insistent begging. I have to admit, he had a fair point; those telescopes cost way more than all of the Barbie dolls and Disney movies I’ve received for Christmas combined, and besides, my parents were convinced that this was merely just a phase. Ten years later, here I am, preparing to go into the very field of study I had dreamed of throughout my childhood.

This year, I’ve started to develop an interest in an entirely new side of science, one that many assume is illogical and straight-up just falsehood: astrology, the study of the twelve zodiac signs. Though it may be an unpopular opinion, I truly believe in horoscopes. Yes, those Instagram posts that pop up in your suggested feed may just be stroking your inner ego; but, there’s more to astrology than what some social media account tells you. Take a look at the app CoStar, for example. The amount of family members and friends I’ve convinced to download it is innumerable, but what strikes me as most impactful was seeing nearly every single one of them adopt a new, more positive perspective on astrology as a whole.

There is more to an individual than their “sun sign,” or the sun they were born into. For example, I’m a Pisces, meaning I’m known to be a very sensitive, shy and creative individual towards the people I first meet. This generalization cannot be applied to all Pisces, however, since there are more outgoing or less artistically-inclined individuals that fall under this same sign. Thus, many are prompted to the hasty conclusion that all zodiac descriptions are too general and faulty, and I couldn’t agree more.

With the current trend of horoscope accounts rising on social media, it’s easy to find yourself reading a statement that applies to everyone, even if it’s directed to your specific sign. And I get it. I understand why astrology gets such a bad rep, and I’m here to disprove that same theory.

For every planet that exists within the solar system, there is a sign that is represented in an individual’s personality, which includes things such as a rising, Moon, Pluto, Mars, Venus, Neptune and so on sign. Each planet also rules a particular trait, such as Venus being the planet of love while the Moon characterizes one’s emotions, moods and feelings. My Moon sign is in Taurus, making me a down-to-earth yet rather hard-headed individual with the people I am closest to.

What I admire most about each and every one of these minuscule details is that it tells you something about yourself that you otherwise would’ve likely never acknowledged, even if it’s something you don’t particularly like. Sure, I’d consider myself a sensitive person as a whole, but when someone crosses me, I don’t hesitate to make my emotions known.

Another thing I’d like to acknowledge is the assumption that astrology is the sole dictator of an individual’s personality. I believe that we all mature and evolve in different ways, and a person can most definitely become something different from what their horoscope embodies. But, I would like to emphasize that the very signs we were born into have been given to us with purpose.

According to a study conducted by the National Science Board in 2014, two-thirds of Americans, 65 percent, claimed astrology is not by any means scientific, and a mere 6 percent took the opposing side. But if you really think about it, the zodiac sign you are isn’t too far off from the scientific standpoint of an individual’s birth. Depending on the time, place and date you were born, the positioning of the planets, Moon and Sun at that exact moment determined which signs you have within you as of now. Many people aren’t aware of this, which makes the negative notions of astrology outweigh its true significance.

So, as you sit back and scroll through your Instagram feed, keep this in mind before you interact with another zodiac sign post. After all, the truth is written in the stars, and it is up to you to interpret its meaning.