And I hoop: boys basketball jumps into season 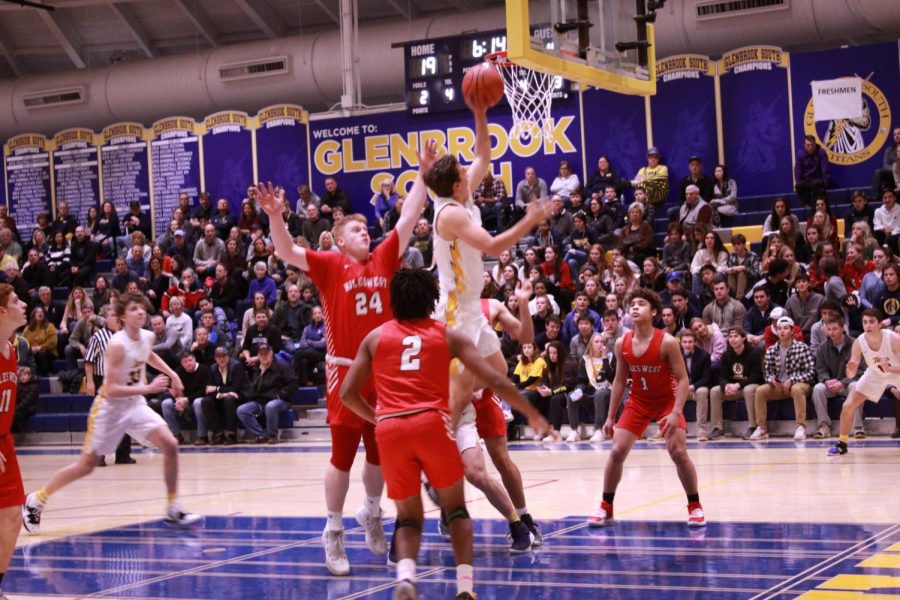 The boys’ basketball team started with strong wins against Uplift, Zion-Benton and Grayslake Central in their Buffalo Grove tournament in late November, head coach Phil Ralston said. The team has been more successful this year than the previous season, which is a result of the team’s understanding of expectations while playing, Ralston explained, but have faced difficulties with the loss of senior Joe Shapiro due to an injury.

“We’ve been more ahead than [in] year’s past,” Ralston said. “I think we have men that know the expectations and are rising to the occasion.”

In order to maintain their undefeated record, Ralston has implemented as many game-like drills into the team’s practices as possible. These skill-based drills help prepare his players for games and encourage communication between players, Ralston said.

“We try to make things as competitive as we can [during]  our drills [in practice],” Ralston said. “We want the kids to be self-motivators and to motivate each other rather than relying on the coaches [during practice].”

Danny Pauletto, Senior shooting guard agreed with Ralston, mentioning that the boys have learned to communicate with each other more each time they go out on the court. Some of the boys have never played together before, so it was important for them to learn how to work together as efficiently as possible, Pauletto stated.

“We’ve got to shout out [each others] names, [and] just always have to communicate with each other because when we’re in a game that kind of stuff has to be second nature,” Pauletto said.

As the boys push forward into their season, they carry a lot of confidence in how their excellence in practice will lead into their gameplay, Pauletto said. He explained the season has gotten off to a great start with a 9-0 record, and the boys are hoping to do even better in upcoming tournaments.

“We have the potential to go even further,” Palutto said. “The big key to us working together is just being able to communicate, being on the same page on the court and off the court.”

Ralston said practices are very important in order to build good players and have successful games. Senior forward Dominic Martinelli also mentioned that the team needs to continue working hard in practice to reach their goal of winning the higher-profile games.

“Our goals are to win a regional game and conference and also hope to compete to win a sectional,” Martinelli said. “We need to keep working hard in practice and stay focused in order to achieve our goals.”

During the Titans’ game against Niles West on Dec. 13, Shapiro suffered a broken tibia and fibula after jumping up for a rebound in the second quarter. South went on to win the game 66-35. Following a successful surgery the next morning, Shapiro explained he is set to heal fully, but will most likely be unable to return to the court this season.

“I jumped for the rebound and came down on another person’s foot, and then my tibia snapped, and the fibula also snapped,” Shapiro said. “I went to the ER and got a surgery Saturday morning.”

A big part of the team’s culture includes caring for their teammates, Ralston said, so Shapiro’s injury was difficult for many players. Ralston explained that experienced players like Shapiro have a huge role in helping the new players assimilate to the team’s culture.

“We like the captains to be the ones that are helping the new kids at varsity level [understand] what the culture is like and how we do things,” Ralston said.

Being a captain himself, Martinelli stated the roles of the captains also include working hard for their goals every day and keeping the connection strong within the team.

“[The goal] is to keep our team flowing and make sure we are working every day towards our goals,” Martinelli said.