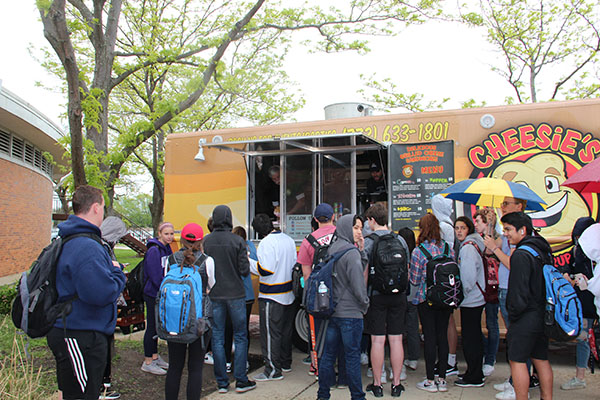 Waiting in line during the lunch blocks on May 17, students patiently stand outside in the rain to get a grilled cheese from Cheesie's food truck stationed in the autos courtyard. South’s annual Spring Fling is intended to boost student morale and celebrate the rapidly approaching end of the year.

South’s annual Spring Fling took place in the West Cafeteria and the hallway outside the Dome on May 17. The event was originally planned to take place in the Auto’s Courtyard, but was moved inside because of thunderstorm warnings and cold temperatures, according to Josh Koo, assistant principal of student activities. Spring Fling, which took place during all lunch periods and was run by Student Council, had a goal of raising student morale and diminishing stress.

Because of the limited space inside, Student Council cancelled one food truck and three of the four inflatables that were originally going to be present, according to Koo. As a result, the event only had one inflatable and there were only two food vendors—Cheesies and Graeter’s Ice Cream. Student Council considered using other areas of South for Spring Fling, such as the gym, but the space was not available because of classes. However, Koo says, almost all clubs that planned to participate in the event were able to fit into the cafeteria.

“Fortunately, every club was accommodated indoors except for Desi Club,” Koo said. “The Diwali Color Powder event had to be outside so we are planning to reschedule the event [for] next week.”

The Executive Board of Student Council met the day before Spring Fling was scheduled to discuss possible options for the event, because of the weather. Rescheduling the event was mentioned, Koo says, but the Executive Board decided to have the event take place on the original date because the food trucks and inflatables were not available for the alternative date. Although the event was smaller than expected, Koo believes that it accomplished its goals.

“I am proud of our Student Council students who adapted to being inside and making the most of the situation,” Koo said. “There was great enthusiasm and excitement amongst the students, which I felt made the event a success.”

During the event, many clubs had booths or tables set up to sell food in order to fundraise for themselves, according to Kate Gregory, Student Body President. Despite the decreased size of Spring Fling, Koo says that fundraising went well for the clubs involved. He added that many clubs were happy with the amount of money raised, and several sold out early. The event was also intended to highlight student performances, which included a student DJ, as well as student bands and singers.

“[Spring Fling] is meant to be something exciting and a fun tradition for the school,” Gregory said. “But it’s also a really great opportunity for clubs to fundraise and for people to get excited about school in general.”

Student Council tried to make Spring Fling as cost-free as possible for students and did not profit from the event, so the activities that were run by Student Council itself did not cost money, according to Koo. Food and games provided by food trucks and clubs, however, still cost money.

“We’ve taken an initiative with Student Council to provide as many free services as possible, and [Spring Fling] is one [of them],” Koo said. “All of the money that clubs make, in terms of their sales during that day, goes right back to the clubs.”

One of the clubs that used Spring Fling as a fundraiser was SAFE (Self Appreciation for Everybody), which participated in the event for the first time. At the event, SAFE sold Rice Krispie Treats and gave out stickers with positive messages on them, according to Despina Mandarino, science teacher and the sponsor of SAFE. Spring Fling provided the club with an opportunity to raise money that the club will use for their future projects and events, says Mandarino. The change of the event’s location and size did not impact SAFE’s sales, Mandarino adds. Additionally, the event allowed SAFE to raise awareness about the club, and encourage students to join.

“[Raising awareness] is our main goal, and it’s basically the main reason we’re [participating in Spring Fling]—to bring awareness to the club and get our membership even higher,” Mandarino said.

It took about two months to plan Spring Fling, according to Koo. Student Council tried to base their decisions on what to include based on what they thought students would enjoy, Koo says. Other factors in the decision-making process included the availability of vendors and the budget, which came from money that Student Council earned through fundraising over the course of the year, such as running the concession stand during football games. Planning committees were formed, and each committee worked on certain aspects of the event, according to  Angela Shechtman, appointed representative for the Junior class.

“Everyone would be divided into [committees] such as Clubs, [or] Stage, or Publicity.” Shechtman said. “Each group of [around] five people would go and do things that [relate to their committee] before the day of the event.”

Student Council also planned the setup of the event, and worked with clubs to provide them with what they needed, according to Shechtman. Each club planned what they wanted to sell or offer, Shechtman says, but Student Council took the primary organizational role. Koo adds that the setup was organized in a way that allowed students to experience as much of the event as possible, and create a positive environment to celebrate the end of the school year.

“We’re trying to celebrate the year that we’ve had, and acknowledge that school can be tough,” Koo said. “We also want to make sure that even though it’s tough, we can provide avenues where students can still celebrate their peer relationships, and support each other in terms of the clubs that they’re involved in, or their ability to perform onstage, or even just meeting someone new as they walk around.”