More than a score: How sports unify people like nothing else can 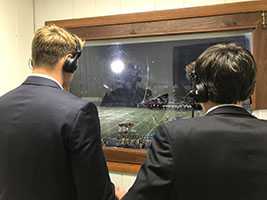 As I rushed off the shuttle to the gates of Soldier field for the Chicago Bears final preseason game with my good friend Ben, I had only one thing on my mind: Bears football. Did I care that none of the starters were playing? No. I was just excited to sit in Soldier Field again and enjoy the sound of the crowd, the overpriced stadium food, and most importantly, seeing my favorite sports team play.

After the Bears lost to the Packers, I found myself lying on Ben’s basement floor crying. All I could think about was how close the Bears were to defeating our rivals. The team that I hate more than anything had once again bested my team, and as I sobbed in my friend’s basement, I began to wonder why this team affected me so much. Why was I crying (again) about a team that I had no control over? Then it hit me like a Khalil Mack blindside tackle: the Bears had influenced my entire life.

I have a bunch of sentimentality associated with Chicago sports. My grandfather has been a Bears fan since George Halas was still coaching back in the 50’s. I mean, my grandfather is the person who introduced me to Bears football. I always had immense pride for the history of the NFL’s marquee franchise. I had never thought about how the Bears had influenced my dream of calling games on Fox NFL Sunday, or how they brought millions of fans together.

I’m not Jeff Joniak and the South press box doesn’t quite live up to the media wing at Soldier Field, but I feel a deep connection to the roots of Chicago football during my calls of GBS games. While sitting in the broadcast booth looking over John Davis stadium, my mind races with eagerness and anticipation. That excitement is the same feeling I get when I watch the NFL. The rush of watching legends like Brian Urlacher terrorize offenses sparked a fire in me, which led to the discovery of my passion for broadcasting. It never hit me how much the Bears played into that, and now I can’t imagine what my future would be like if I wasn’t introduced to Bears football.

After realizing that my love for commentating was influenced by Chicago football, I noticed how sports affect people worldwide. Fans everywhere argue, fight, and scream about their beloved teams out of love and care, and that is exemplified more than ever in one place: the stadium. Every weekend, millions of fans flock to stadiums to catch a glimpse of their team. For me, going to games makes me feel like a part of the action. I feel like even in the smallest ways, I’m contributing to their success. I feel that my voice, screaming and hollering , contributes to the victories of the Bears.

For fans, the players, score, and setting matter. Sitting in Soldier Field, feeling the breeze off Lake Michigan and soaking in those moments before kick off, is something that will always bring me peace of mind.