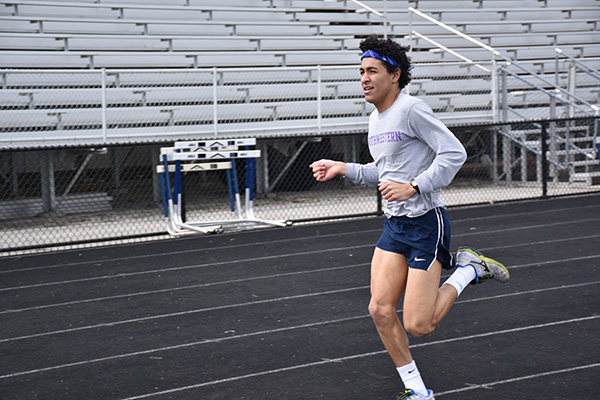 The GBS men’s track team is off to a strong start, and although many seniors graduated last year, the team is hoping to replenish the team with younger, upcoming athletes, according to head coach Kurt Hasenstein. With plenty of fresh talent being added to the team, senior Jordan Theriault states that finishing in the top half of conference will be an obtainable goal this season.

According to Theriault, the team has already finished 4th at the indoor conference meet, and has won their first annual GBS indoor relay meet. This not only gives the team confidence in their abilities to do better than last year, but also enables them to put in the hard work in order to succeed, Theriault states.

This season, the Titans are strong in several areas, according to Hasenstein, but they have the most depth in their sprint and hurdle groups. The various experienced varsity players and superb leadership skills from the seniors is what gives these two groups strength Hasenstein says.

“These groups are strong because we have outstanding leadership from our seniors who also have a lot of varsity experience,” Hasenstein said. “Several athletes in this group worked very hard in the off season to improve their technique and strength levels which in turn improves their ability to perform.”

While each individual event may be strong, there’s always room for improvement on a team, according to Hasenstein. Coming together as a team is something the Titans struggle with, Hasenstein states, and a void in leadership left by last year’s graduating seniors has yet to be filled. According to Hasenstein, stepping up into these leadership roles is vital to the team’s overall success.

Staying healthy is also vital in order to defeat rivals in their competitions, according to Wood and Hasenstein.

“If we can stay healthy, I really do think we can stay in the top half,” Hasenstein said. “One of our better seniors is still nursing a hamstring problem, so that’s holding back our relays a little bit. But I think when we get him back, it will make us that much stronger.”

Hasenstein says this year, Evanston is the Titan’s top competition. Although the GBS team failed to defeat Evanston in the indoor conference meet this season, they hope that the transition to the outdoor season will provide an opportunity to be even more competitive.

“They almost doubled everyone else’s scores, so it’s all of us chasing them,” Hasenstein said. “They’re a perennial state power, so it’s always fun to see how close you can get to them.”

State is the top goal for the Titans, according to senior Max Gerber, and although it is a difficult task to accomplish, the current juniors and seniors are going to be adding a lot of additional abilities to the team. Because of the amount of talent, most of the committed members on the team will likely succeed in sectionals and hopefully qualify for the state competition, according to junior Dimitri Manesiotis.