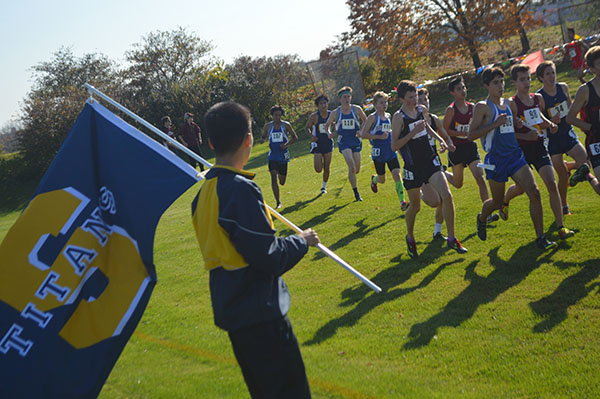 starting sophomore: Waving a flag, junior Daniel Cho supports his team while at the IHSA Regionals meet, which was held at Loyola Academy, where the Titans placed second out of ten teams (left). This was the last meet before Sectionals where they placed eighth to finish their season.

The overall depth of this year’s men’s Cross Country team has made them competitive and dangerous, states senior Jack Whetstone. After a third place finish at the CSL Conference meet, the Titans aim to compete well at Regionals and hopefully make it to the Sectional meet, according to Whetstone.

Whetstone believes the Titans’ success can be credited to the stability and consistency that the boys have shown throughout the season.

“We have fared pretty well against our competition this year,” Whestsone said. “Like any team we’ve had some rough races, but everyone except maybe one or two have gone just as we’ve wanted them to [and] it’s been really great, we have ran well against teams in and out of our conference this year.”

In addition to consistentcy, the Titans display of range has given them a strength in numbers, according to Whetstone.

“We have seven varsity runners including myself,” Whetstone said. “It doesn’t stop there, the mark of any good team is depth and we’ve got a whole bunch of kids who are ready to take on any of the responsibilities that we ask them to.”

Strong leadership has helped propel the Titans to success in meets, more motivated practices and stronger team cohesion, according to Whetstone.

Leadership is expressed throughout the program, whether it is expressed by example or vocally, according to head coach Kurt Hasenstein.

“We always look to the senior class for leadership whether they’re captains or just upperclassman on the team,” Hasenstein said. “The senior class has been great in terms of leading workouts, […]leading warm-ups before meets and mental preparation. The seniors have been outstanding.”

Statistically, the Titans sport a 5-2 overall record, a 3-2 Conference record, and have placed in the majority of their invitational meets.

The Titans started the season off with a dual meet against Glenbrook North, where they ran with utter dominance and handed GBN a loss, according to Hasenstein.

“We always like to start the season off with a little district rivalry,” Hasenstein said.”We kind of crushed them this year, so all the guys were really excited about our win there.”

The Titans’ success continued over to their first invitational meet of the season, according to Hasenstein.

“Our meet at Crystal Lake starts our truly competitive season,” Hasenstein said. “Both our Varsity and Frosh-Soph levels won trophies at that meet.”

The Titans placed second out of ten teams in the regional meet on Oct. 22. However, the Titans are approaching every meet as if it is the first one, according to senior Sam Cowhey.

“Every race is a new ballgame, every race is completely different,” Cowhey said. “One race could go our way, another could not. You have to be ready for what is coming at you.”

The team raced in Sectionals this past Saturday, and recieved eighth place, missing state qualification. According to senior Brendan Fontillas, the top five teams qualify for state.

“It was pretty emotional after the race knowing the season was over and we couldn’t do anything about it,” Fontillas said. “Everyone thought they could have [ran] better, and we might have gone [to state].”

According to Fontillas, the team knew they were going to have to pull tricks out of their sleeves in order to qualify. Hasenstein was hopeful  throughout the meet that the team could do it.

“He told us about the 1993 team who got eighth in sectional, and the 1994 [team] went to state,” Fontillas said. “He also touched on the fact that we have a young team, two of our runners are sophomores.”

Though Fontillas did not compete in sectionals, he was able to support the team as they raced.

“I was happy with the way I cheered the team,” Fontillas said. “I was able to tell them their places because time isn’t the main concern.”

Fontillas hopes the team can be like the 1993 and 1994 team and qualify for state. According to Fontillas, he thinks the team has a good chance.