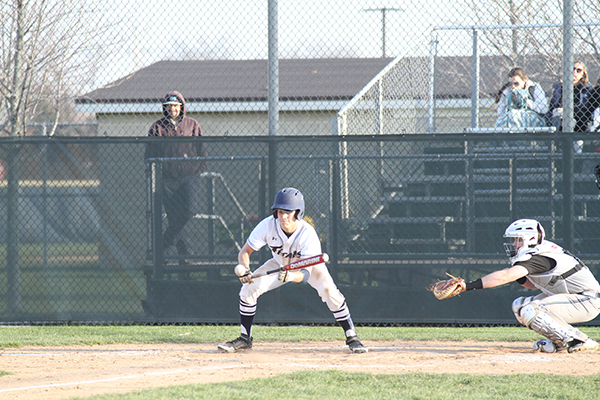 BEATIN THE BALL: Eyes on the ball, junior Cameron Pauly, prepares to bunt.

The men’s baseball team has a current record of  3-9. According to Senior Captain Jordan Libman, the men are hoping to place top in conference and make it to regionals or the sectional semi-finals when the playoffs begin in late May.

Though the men’s baseball team has had a rough start, according to Junior Captain Cameron Pauly, he is optimistic that once everyone finds their place on the team they will begin to head into the right direction.

A component of finding this dynamic will rely on the pitching staff, and, according to Pauly, this is where the team could rise or fall. The men graduated their top three pitchers from last season, but Pauly believes the hard work during the off-season from this season shows the men’s dedication to the team.

“It really showed who they are and what they can contribute to the team,” Pauly said.

According to both Libman and Pauly, a large aspect of the team this season is that close team bond the men have. According to Libman, this chemistry is apparent during games.

“I think that team chemistry helps streaks go,” Libman said. “When everyone starts hitting, everyone starts getting excited and into the game. It contributes on and off the field; […] Everyone’s very dedicated to the program.”

Pauly feels something the men can work on is their mentality at the plate by having a strong mindset during practices.

“I think our defense [is] very locked down, and I don’t think we’ll make a lot of errors this season,” Pauly said. “But I think our hitting needs to follow that and put stress on [the other team’s] defense.”

Over spring break the men traveled to Carbondale, Illinois, where they played various games. According to Pauly, who did not attend the trip, the team didn’t win any games, but the trip was still beneficial.

“The spring trip isn’t about winning games or being the top one out there,” Pauly said. “It is about getting back into baseball shape [and] learning how to play against good teams and control them. The competition down there is always better than up here, and I think the more exposure we get down there the better and more prepared we’ll be for the season.”

According to Libman, the extended time to practice outside on the field has been helpful this season as they have become more comfortable on their home turf.

“I know, for the outfielders, it helps [us] see the ball better,” Libman said. “It’s a lot better than being inside, lighting-wise. There’s just more room to do more stuff.”

Competition for the Titans this season, according to Libman and Pauly, include New Trier, Maine South, GBN and Evanston Township. While Pauly does want the team to be successful, he believes it is more about the execution.

“It doesn’t come down to [the goals the team has], [but] the people you have, the pitchers you have and the team you’ve evolved with over the season,” Pauly said.