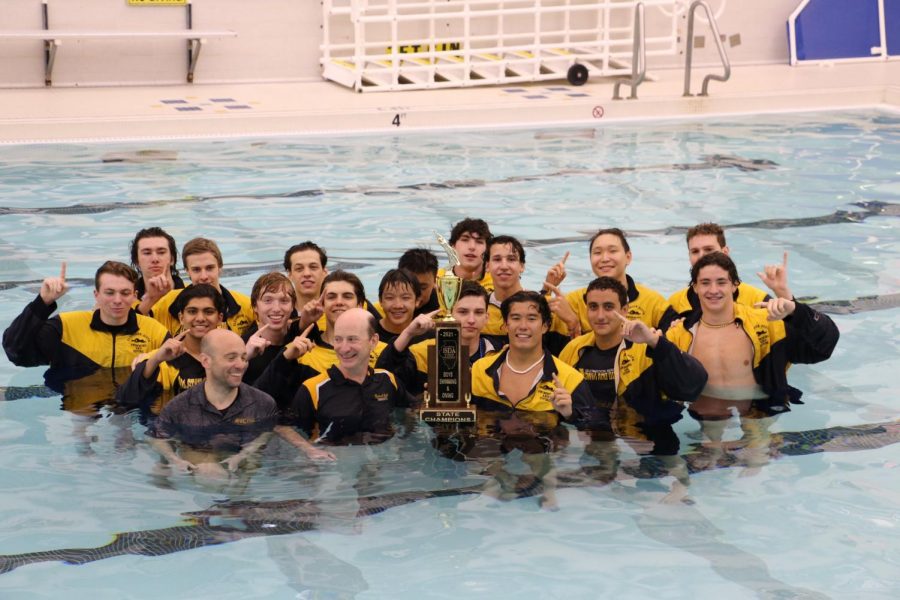 Senior swimmers Max Iida and Sami Moussally are enjoying their time at the top. The duo finished first and second in the Central Suburban League South conference meet and helped South boys’ swim to their first ever state championship.

Iida, a University of Virginia swimming commit, and Moussally, who will swim at the University of North Carolina next year, will compete against each other in college within the Atlantic Coast Conference. For now, however, the pair are enjoying their success in their last ride at South.

In an unorthodox year where there was no Illinois High School Association state championship meet, the state champions were determined through scores in conference meets and awarded by the Illinois Swimming and Diving Association, Keith MacDonald, boys’ swimming head coach, said. MacDonald admired his team’s resolve to treat the season just like any other.

“There were so many more challenges this year,” MacDonald said. “At the same time, the boys didn’t treat it like it was any different. You wouldn’t know that we were in a pandemic based on what their attitude was throughout the entire season.”

When the dust settled, the team had broken all of seven conference records en route to the state championship.

MacDonald said that Moussally’s leadership was important for the team’s ability to stay focused on their goals this season. Moussally struck a balance between lightheartedness and hard work.

“I like to bring high energy and high spirits to every practice,” Moussally said. “I like to keep things fun, but I also like to maintain leadership as much as I can. I want to make sure [the team is] having fun.”

Iida and Moussally were highly complementary of each other’s leadership abilities. Moussally credited Iida, who qualified for June’s Olympic Trials, for keeping the team motivated and also succeeding individually.

“[Max is] very motivated,” Moussally said. “He never wants to put anyone down, he just wants to motivate people to finish a practice, finish a set and do well in meets.”

Perhaps the greatest representation between the differing styles of Iida and Moussally come in their pre-meet routines. Iida, normally a heavy eater, eats a light meal before blasting some rap music to hype himself up. On the other hand, Moussally is partial to a pre-meet nap, fruit snacks and reggae music to get himself in the mood to dominate his competition.

Despite the team’s postseason success, Iida had tempered expectations for the swim season because of Covid-19 restrictions and the loss of graduated seniors from last season. However, the turnover provided little obstacle for the team’s later triumph, a fact that Iida is particularly proud of.

“We thought our team last year was going to be the one that [won state],” Iida said. “We turned around this year and came back with an even stronger team. The work we put in finally paying off is a good feeling.”

Iida was proud that his team was the one to break through and bring South boys’ swimming its first ever state championship. In fact, in a career already marked by broken records, college offers and an impending Olympic Trials appearance, Iida saw this year’s state championship as his top swimming moment so far.

“This is number one right here,” Iida said. “The GBS team has never won a state championship, so to bring that home was cool.”

MacDonald found the added stresses due to Covid-19 made a shortened season feel plenty long, and he was relieved for it to end with little health concerns among his players. Though he was thrilled with the end result, he was hopeful that future seasons would come without a looming cloud of cancellation threatening the team.

“It was an extremely long season, which is weird to say because it was an extremely short season [because of Covid-19 precautions],” MacDonald said. “It was a relief to reach the end, and then the success we had was just a cherry on top.”