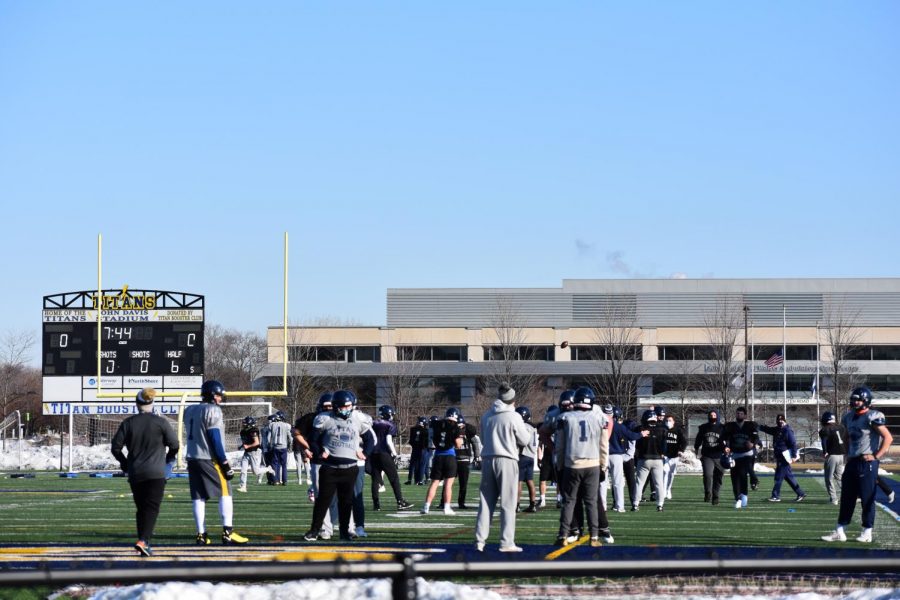 Bouncing back: Running through the playbook, the varsity football team holds a cold, March Saturday morning practice on the turf nearly two weeks before their first game.

This year, however, the fall came and went and the Friday Night Lights stayed dim. Now, though, with spring approaching, South football is ready to kick off today with their opening game at New Trier in accordance with a January 26 Illinois High School Association (IHSA) decision that allowed for the beginning of the high school football season in the state of Illinois.

After the verdict, South football players will be participating in six games in the Central Suburban League (CSL) Conference, starting today, according to South’s football calendar. Head Coach David Schoenwetter laid out how the schedule’s changes will affect the team.

“One major difference is that we’re immediately playing conference games against New Trier [High School],” Schoenwetter said. “We’ll end the season with a crossover game against the other side of the conference and we don’t know who we’ll play yet, so that’s kind of exciting. The last part is there’s no playoffs this year, so there’s a dramatic difference in terms of what we’re shooting for.”

The team is grateful that they have a season and are taking the proper precautions for Covid-19. Senior Anthony Travlos, defensive back and wide receiver, is excited for his final year playing football at South.

“The fact that we were able to get six games, I’m optimistic, I’m happy with it, because I honestly didn’t think we were going to get anything,” Travlos said.

Despite Travlos’s optimism, many of his teammates were disappointed they had to settle on a shortened season, he said. Seniors especially were hoping to play a full season to conclude their time at South. Travlos noted that football already has a relatively short season.

“In a normal year, you are only guaranteed nine games,” Travlos said. “Over four years you’re only guaranteed 36 football games, which for some sports, 36 games is as many as you have in one season. It was disappointing when we were really hoping for a full season.”

Senior quarterback Michael Bauer said that the team has been strict about following safety protocols, even with their reduced practice and playing time. Bauer believes that their safety measures (keeping masks on throughout practices and games, washing their pads everyday and saliva tests) effectively work to prevent spread of Covid-19 among the team.

“The safety measures are solid,” Bauer said. “Our coaches are really strict [about them] and I know that our players understand them and respect them. [We] know that if we cross the line that we’re going to have to sit out for a little bit.”

This football season is different from past seasons, Schoenwetter said, because they normally have 11 weeks to prepare for their season in the fall, but with Covid-19 they were only allowed to train for two weeks. Additionally, they struggled with the lack of space and consistent practices, according to Schoenwetter.

“It’s been such a start-and-stop endeavor going all the way back to the summer,” Schoenwetter said. “We had practice in the fall and then some lifting in the winter and now we’re back to contact days again, and the season is about to start. So it’s been trying in terms of progression.”

Senior Will Solis and Dr. Ed Solis, Will’s father and GBN Associate Principal, are both happy that Will is back playing football. Throughout the whole preparation process for the season, Ed has become even more proud of his son.

“It has been difficult but Will is an inspiration to me,” Ed said. “He found ways to keep active without football.”

“There’s a lot of anticipation,” DiSano said. “Sometimes in the car, I’ll just play a song that we played before the games and that just kind of gets me going. It just makes me think of putting on the helmet, putting on the pads and just walking out. Even if there are no fans, you just still get that stomach feeling.”