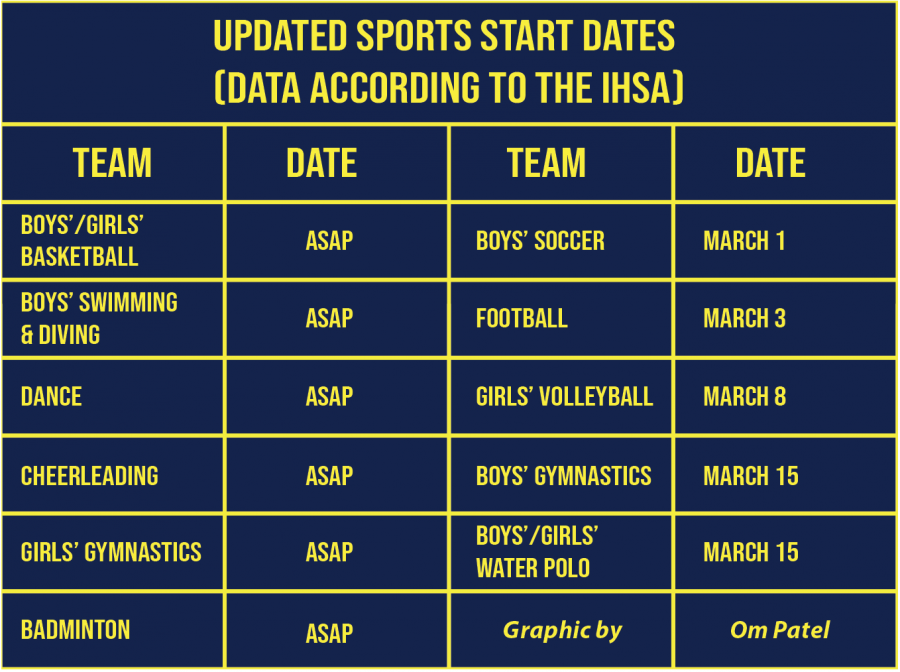 The Illinois High School Association (IHSA) recently allowed basketball, boys’ swimming and diving, dance, cheerleading, girls’ gymnastics and badminton to start as soon as possible. They will be able to participate in practices and intrasquad scrimmages, while contests against different schools will vary on how high risk the sport is.

Other sports that are not listed above are able to have contact days, no more than six hours a week with their program. The start of these sports seasons vary from as early as March to as late as April 19. Their training, however, may start earlier on.

Football is particularly imortant to Schoenwetter, who stressed the significance of playing a season for the purposes of his players mental health. The IHSA approved a shortened seven game season this year.

“The reason why I say [I want to play] is one, I love our senior class of players and I want them to have a season,” Schoenwetter said. “Two, in terms of mental health, I think it is important we get back to some activity and give these guys that outlet they’re looking for.”

With the excitement for everyone to be back together, Kelly Dorn, girls’ volleyball head coach, is hopeful for her girls to have a season. Her goal for the year is to send her seniors off with a form of senior night, and normalcy during their season. However, Dorn worries how many of her athletes will decide to stick with club when they are given a limited season. Dorn advises for players to work on improving during the pause.

“Keep playing! In club practices, in your basement, with your siblings do what you can,” Dorn said. “The game they grew to love will still be here when they come back.”

For many sports, state competitions are still in question depending on the Covid-19 rates in Cook County. While cheerleading and dance can compete virtually, other sports that are starting immediately do not know if they are competing at state, according to the IHSA. Some sports, namely basketball and football, have already had their state series postponed.

Justin Leszynski, senior soccer player, would like to have a proper ending to his South soccer career, leading future players in the right direction for the coming years. In particular, Leszynski will miss the South student section at his games.

“It’s a little sad that [my] last season might not have any fans,” Leszynski said. “That is one of the best parts about the games, but I have had two years to experience it. All I can ask for is for some sort of season regardless of what the circumstances are.”