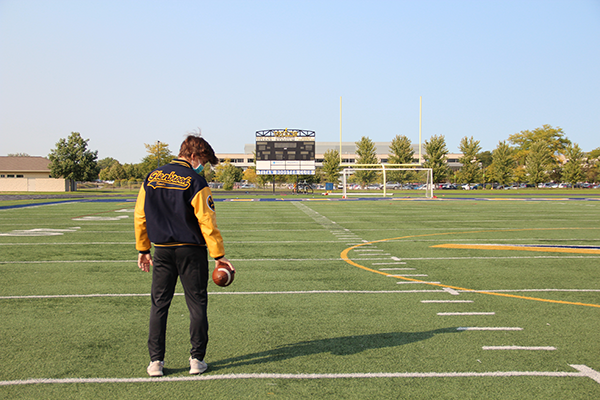 Melancholy Michael: Standing alone on the football field at John Davis Stadium, Varsity Quarterback Michael Bauer contemplates the arrival of his season. Because of IHSA regulations as a result of the coronavirus pandemic, the South football season will begin in February of this school year instead of August like normal

The smell of fall is in the air. Flannels are out, pumpkin spice lattes are being sold and the lights are on at John Davis Stadium. In the past, that would mean it’s football season. However, because of the ongoing coronavirus pandemic, senior Quarterback Michael Bauer is among the many fall sports athletes who are forced to spend the months normally dedicated to their sport waiting at home for a postponed season.

Football, along with boys’ soccer, girls’ volleyball, girls’ badminton, boys’ gymnastics, girls’ field hockey and boys’ and girls’ water polo, have had their seasons postponed to mid-February, as opposed to the fall when they normally play, according to an IHSA press release. Though the delay in the start of the season is disappointing, Bauer has found some unexpected benefits from the time off.

“It’s given me more time to hang out with my new teammates and to keep lifting and get stronger,” Bauer said. “I’m throwing the ball more and it’s just more time to practice.”

Senior Landon Garrett, a defenseman on South’s hockey team, has already experienced the pain of a season cancellation at the most inopportune time. In March, South’s hockey season was called off ahead of the state semifinal tournament, Garrett said, ending the season on a cliffhanger.

Like Bauer, Sydney Marovitz, a senior girls’ field hockey player, is another team leader trying to navigate the rescheduling of the season. Similar to football, field hockey is a sport that normally starts in the fall but will begin this year’s season in the late winter. Marovitz is tasked with maintaining enthusiasm for her sport despite the challenges faced with a suspended season.

“Since [the season] is being moved to the spring, I have a lot more leadership roles in the fall,” Marovitz said. “I have to get more girls excited and keep them motivated because it’s quite a big distance from October to February.”

To accomplish this, Marovitz hopes to make the most out of the team’s pre-season practices. Though their summer camp was one of the few canceled, they still have plenty of time during the fall to make up for missed opportunities, according to Marovitz.

“We usually don’t get that much time to bond as a whole team,” Marovitz said. “Hopefully getting a full month [of practice] to bond with our returners and our new players will be really beneficial for us in the spring.”

For the ice hockey team, the start of their season is still marred by uncertainty. With hockey still classified as a high-risk sport, the team doesn’t know when they will be able to start the year, according to Garrett.

“We’re kind of just waiting because hockey is categorized as high-risk,” Garrett said. “We’ve been practicing and doing everything normally but we’re just waiting to play games.”

Despite all the hardships of losing his sport for the fall, what Bauer misses most are his relationships with his teammates. Bauer feels confident in the relationship he shares with his team and hopes it continues to strengthen.

“[What I miss most is] seeing the guys everyday,” Bauer said. “[I miss] the stupid things we do together in the locker room and just playing together. I feel like [the seniors] bond really well with this junior class, and I hope we get to continue to bond with them.”