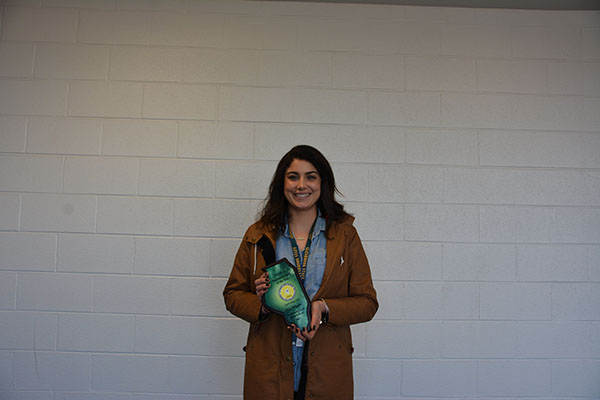 Awarding Ahlgrim: Holding her plaque after winning the Regional Head Coach of the Year Award, Meg Ahlgrim, varsity girls’ tennis head coach, expressed surprise at being chosen after only one year of coaching the team.

Promising athletes naturally possess the skills and stamina to achieve greatness, however, most require the guidance of a coach to push them past their limits. But what makes a coach so special? Is it their hard work and dedication to the sport and its upcoming athletes or student-centered attitude and eagerness to create a successful team?

The Girls’ Class 2A Regional Coach of the Year is awarded to a coach that goes above and beyond in every aspect of creating a strong-willed team and this year, Meg Ahlgrim, varsity girls’ tennis head coach, was awarded the title. As a first-year head coach for South, Ahlgrim was surprised at the fact of even being considered for such an award.

“At first I didn’t totally understand because I love [the team] and it’s so easy to do my job with [them] so it was surprising,” Ahlgrim said. “We did really well as a team but I did not expect at all to have that kind of recognition because I didn’t feel like I did anything too extraordinary.”

However, the Illinois High School Tennis Coaches’ Association Board of Directors believed Ahlgrim was the perfect representation for such an award. According to Bill Lange, assistant varsity girls’ tennis coach and board member, his nomination of coach Ahlgrim was not only based on her team’s eighth-place finish at state, but rather her development of a team with talent and character.

“Well, for one thing, Coach [Ahlgrim] is the most positive and energetic coach that I have met in a long time,” Lange said. “I think that her knowledge of tennis, her expertise in conditioning and knowing the game and how to work with tennis players and people, in general, are really great qualities that she has. She is going to be a heck of a coach for many many years.”

Senior Jenna Kim, varsity tennis player, stated that coaches should have the ability to decipher between what needs to be added to a program versus what should be kept the same, and, according to Kim, Ahlgrim navigated that line perfectly. Additionally, Kim applauded  how Ahlgrim handled the pressure to meet as well as exceed expectations.

“What impresses me the most is she really navigated that fine line so perfectly,” Kim said. “Obviously, she’s not adding anything radically crazy to the tennis team, but she is still really improving it and making [the team] the best that it can be.”

Although Ahlgrim explained that her job entitles non-stop activities like preparing and managing the team, she stressed how much she enjoys the job. From heading out to the courts to building a relationship with the students, Ahlgrim explained that part of the reason she wanted to work at a high school was so she could coach a team of her own.

“Probably the most fun part of my day is going out to the courts with [the team],” Ahlgrim said. “It could be a corny thing that coaches say but it does feel different to coach a kid versus teach them [because] there is a different inner relationship there.”

As a coach, it is important to keep the team connected as it is a crucial aspect of forming a strong team, and according to senior Ariya Patel, varsity tennis player, Ahlgrim displays this trait by going above and beyond in everything she does.

“She helps the team become closer together; she finds a way to help us bond,” Patel said. “The team has become closer because of her doing. Also, she always has an upbeat attitude that brightens the team and she helps us focus on improvement instead of losses.”

“I want to take all of that knowledge and make sure that I am consistently and constantly applying it into everything I do because being part of a sports team to me is so important and it’s a huge identifier,” Ahlgrim said. “I just want to make sure that we are representing ourselves well.”