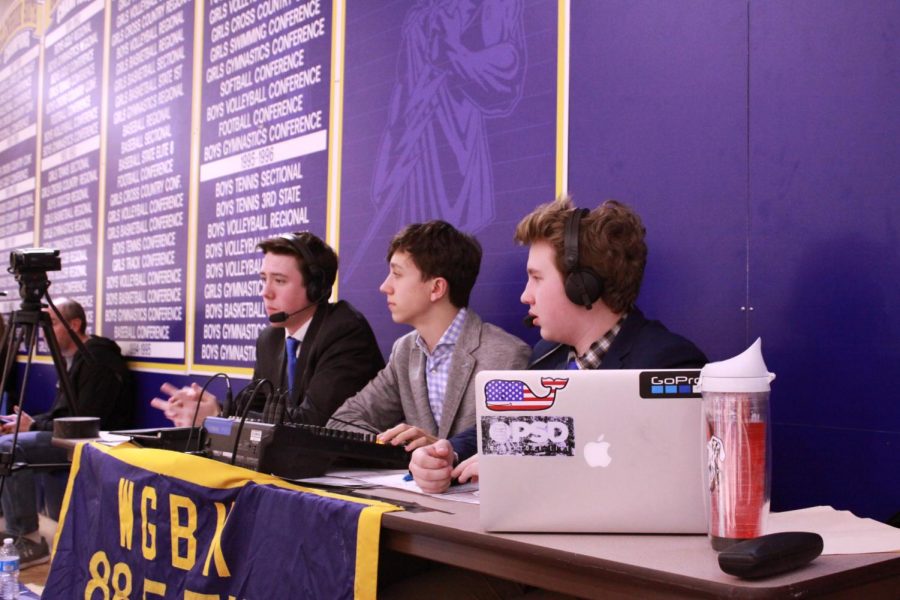 News and sports radio work year-round to live broadcast school sports games and talk about different sporting events on the college and professional level. This program allows students to share their ideas with listeners and have conversations about topics they love with their peers, junior Bryce Gaubert explained.

Radio allows students to share their ideas, opinions, and love for sports, Radio Adviser Dr. Daniel Oswald said. This allows students to develop conversational skills and feel comfortable while speaking to people not only about your opinions, but about contrasting ones as well, Gaubert said.

“Just the whole fact of being able to talk and know that people are listening, not only does what you say matter, but it teaches you the whole basics [of learning how to use the different equipment] and gets you much more comfortable talking to people,” Gaubert said.

Still, radio has challenging aspects as well, according to Danny Pauletto and John Christ. senior sports directors, who said that the beginning of working in radio is the hardest part. Radio is taken as an elective at South and it is in the introductory class that new radio members get to know the people and equipment. Christ explained that he is excited to help teach the younger students radio basics, just like the sports directors helped him when he was new to the program.

“The beginning was really tough, but once the older sports directors, who were seniors when I was a sophomore, helped me and got me through that, it made it so much better,” Pauletto said. “That is what I’m doing now to the younger kids who are taking the class and trying to get into radio.”

The sports directors are split up among the three blocks during the school day, taking place during gold one, blue two and blue four. They help teach the class by making sure the younger students get comfortable on-air and are using the equipment correctly, Pauletto said.

“We teach them how to write news, get them more comfortable on-air and teach them how to use the equipment,” Pauletto said. “We manage the class because it’s tough for Doc [Oswald] to keep track of everything and make sure they have the skills they need to produce.”

Gaubert explained that for him, the class is all about the experience and the learning process. He said that the pride of finishing the preparation of a project is priceless because it helps the entire station, not just him.

“I would say [my favorite part is] just being able to get experience on-air, learning what you have to do to prepare and what it’s like to have to work with other people in order for the station to be successful,” Gaubert said.

Oswald pointed out the importance of working with other types of broadcasting, such as TV, in order to be more successful and have a better knowledge of different types of journalism.

“The News and Sports program will now be working with video,” Oswald said. “That may seem counterintuitive, but it’s not. To be well-rounded broadcast journalists, you must have an understanding of all different types of storytelling.”