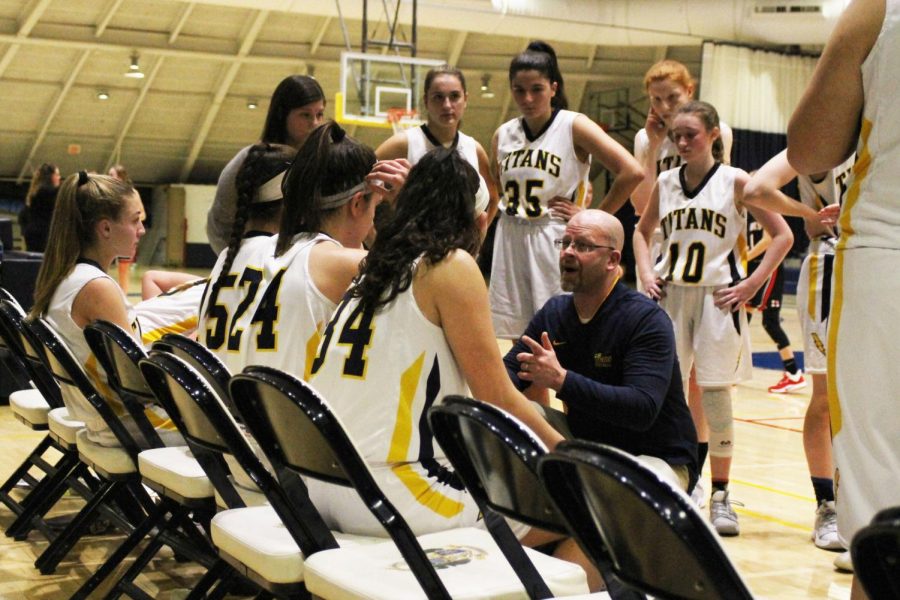 Coaching change: Coaching the South girls’ basketball team to a 37 - 35 loss at the hands of Maine South, Coach Scott Nemecek motivates the team from the sideline. Nemecek’s head coaching experience at South began with six years coaching the boys team and, after a stint as girls’ assistant coach, he took the role of varsity girls’ head coach prior to this season.

Blue and gold jerseys dash across the basketball court followed by the blur of black and white as the referee zooms past. Yet an integral member of the girls’ basketball team, the coach, is seen on the sidelines pointing vigorously while directing the players. Most students know him as a math teacher, yet this year, Scott Nemecek has taken on the role of girls’ basketball head coach.

Basketball has been a part of Nemecek’s life for almost 40 years. He grew up playing basketball in La Grange, a western suburb of Chicago, and attended the University of Iowa.

“[I] went to the University of Iowa,” Nemecek said. “I didn’t think I was necessarily capable of playing at that level, but I tried out for the walk-on team. [After missing the team,] I decided it’s time to start coaching.”

Before Nemecek’s transition to South, he began his coaching career at Homewood-Flossmoor High School, located in Flossmoor, IL. After 11 years of coaching in the same environment, Nemecek decided it was time for a change and came to South. At first, Nemecek was the head coach of the boys’ basketball team for six years before taking the role of the girls’ assistant coach after a two-year break from coaching. This year is his first as the girls’ head coach.

Nemecek said he has gotten to know the girls very well. Even though the season has just started, he has noticed the amount of talent on the team. Nemecek stated that there is a very versatile lineup and with that, the team can attack in many different ways.

“Sometimes, I think we are going to be bigger than opposing teams in multiple positions and will frankly be able to beat them up a little bit,” Nemecek said. “At other times we have kind of a smaller but faster line up. We might be able to just run around people and make trouble for them by being small and fast.”

Many of the girls have their own talents, according to Nemecek, and he thinks it is crucial that everyone gets a chance with the ball. He wants each of the girls to show their talents on the court during both games and practices. Senior shooting guard Maddie Dillon said that it was difficult to adjust to Nemecek during the off-season because he had the team do more activities to prepare.

“It was more difficult during the off-season because, with [former Coach Steven] Weissenstein, we only did open gyms and summer camp,” Dillion shared. “For Nemecek, he wanted to get us lifting weights which is good. We also did the summer camp and open gym. He was good at strength to get us to our best.”

Senior Claire Hackl, who plays guard and forward, shared that Nemecek’s coaching style is very similar to Weissenstein’s, but focuses more on the team rather than individual players.

“Nemecek was watching Weissenstein coach for the past five years and Weissenstein would focus more on starters and top players,” Hackl shared. “Nemecek focuses a little more on the team aspect and making sure everyone knows the plays and what is happening.”

Senior center Alison Reeve saw the transition from Weissenstein to Nemecek as a much bigger shift in practice philosophy than to in-game strategy. Nemecek’s focus on fundamentals has been one of his few major differences from his predecessor.

“I really enjoy that Nemecek this year has been taking a lot of time to work on fundamental skills,” Reeve said. “We lost a lot of good players, so hopefully we can make up for that.”

Due in part to Nemecek’s experience as an assistant, Reeve is not concerned about the coaching change. The team should still have opportunities for success, Reeve said, thanks to Nemecek retaining elements of Weissenstein’s success.

“We have experience with [Nemecek] and it is not a huge overhaul of the program,” Reeve said. “We’re keeping a lot of the same plays.”

Nemecek and the girls are looking forward to the season. The team is hoping to win their second regional championship in a row and advance to win more games after that.

“We are capable of winning a regional so that is sort of what I would call an expectation; we should be doing that,” Nemecek stated.