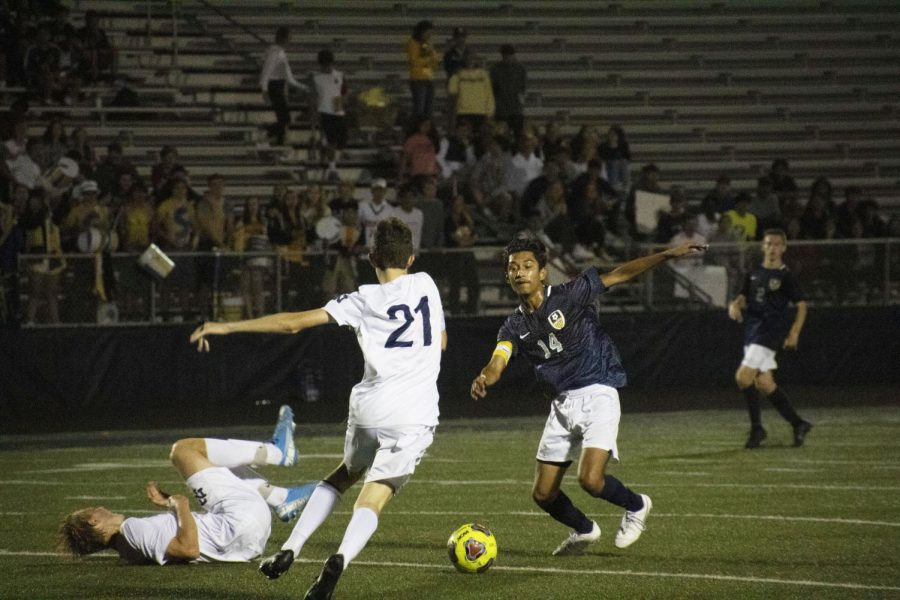 Deadly Defense: Jumping on the opportunity to get control over the ball, senior Jhovany Guadarrama faces off against a New Trier player. On September 17, South tied with New Trier 1-1, and maintained their record of 8-4.

Constant improvement is the name of the game according to Reggie Lara, the varsity boys’ soccer team head coach. As the season continues, the team works to improve on their athletic edge and team bond according to Lara.

During the off-season, Lara offered many strength training workouts, summer camps and summer league opportunities to the players as a way to improve from past seasons. According to Lara, the extra training would intensify the athletic edge of the team and would give the team an advantage over their tougher opponents.

“The boys are constantly working on getting better in terms of their soccer skills and also their athleticism,” Lara said. “I think we’ve been steadily more and more involved in our participation in the off-season training.”

Each player has his own strengths, but it’s a matter of the team coming together and using each other’s strengths that will determine the team’s future, according to Lara. Senior co-caption Julian Issar underlines the importance of understanding each player’s strengths and weaknesses and playing off of that.

“[We] hold each other accountable and push each other whether it be in practice or out on the field because we just want to push ourselves to be the best,” Issar said.

Lara has been specifically focusing the team’s improvement on being physically fit and strong, Issar said. The boys are focused on getting faster and physically capable of beating out their opponents.

“You can tell during the games [that] we’re getting tired, but we’re still fighting till the last minute,” Issar said. “So we’re [working on] getting stronger [in order to] physically battle other teams.”

Senior co-captain Micheal Zenzola explained they each recognize their individual strengths and weaknesses and display a strong will to improve. According to Zenzola, they believe they have the potential to become a stronger team because of their shared passion for the sport and will to improve on all aspects of their sport including teamwork, skills, physical goals and personal goals.

“[We want to] make sure that everyone’s playing [their] best,” Zenzola said. “We try giving advice to each other so that next time if they make mistakes they can fix it and they know how to play better.”

Together the team’s goal is to defeat their toughest competitors in the Central Suburban League, according to Zenzola. In order to accomplish this goal, they are working to utilize their teams’ strengths to carry them to victory.

“I would characterize our team as big, strong, athletic, fast and skilled,” Lara said. “Usually as a soccer coach here, you’re lucky if you have [players with] one or two of those qualities [on the team].”