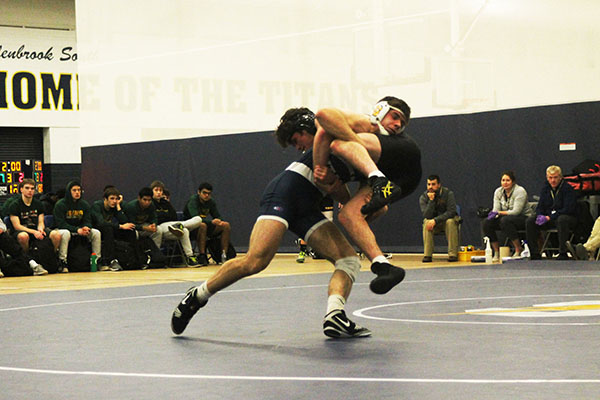 Carryin' Crecan: Taking down a Fremd wrestler, junior Norbert Crecan attempts to gain a win for the South varsity wrestling team. The Titans won the match against the Fremd Vikings 37--36. Photo by Dany Herrera

South’s varsity wrestling team finished the season with 18 dual meet wins, according to senior captain, Forrest Eriksson. In practice, Eriksson leads his teammates in stretching and practicing new moves on each other, which prepares them for competition.

According to Eriksson, Glenbrook South has not won a match against New Trier within the past several years.

“We had 18 teams here at GBS right before winter break,” Castillo said. “We had a pretty good showing, [and] we tied for eighth place. [At] the other tournament in Buffalo Grove, we came in fourth place.”

Eriksson, who placed fourth in conference, also commended junior KP Santos and freshman Will Collins each for coming first in conference.

“KP [Santos] and Will Collins won conference, and I got fourth in conference,” Eriksson said.

According to Castillo, South beat Niles West in a dual meet. Castillo also believes they are going to have a good group of wrestlers going into regionals.

“We had a good team effort at Niles West,” Castillo said. “We beat [the Wolves] 60-18. Regionals are the first week of February and there should be a handful of guys that qualify.”

According to Eriksson, the team has a great record this year, and he has a good personal record as well. The hard work of the team shows in both their personal and team records.

“We are 18-6 and then, myself, I am 12-16,” Eriksson said. “We had two conference champions and seven other players [that placed,] tying the school record.”

In his last year at South, Eriksson says he will miss the team after he graduates in June but he has words of advice for future freshman and for the teammates he leaves behind. These are words of friendship, leadership and advice for wrestlers both old and new.

“The season went well, but we are looking for more improvement next year,” Eriksson said. “Don’t give up. It’s hard but it’s worth it.”