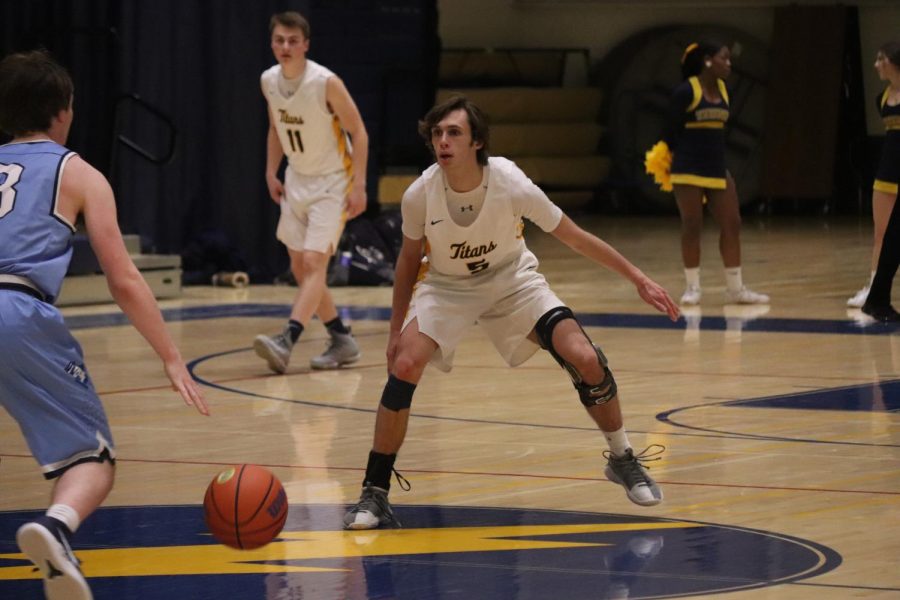 Baskets with braces: Defending the ball against Prospect, senior Tyler Nelson wears a brace to protect his knee. He has suffered two ACL tears in his basketball career. Photo by Quinn Toomey

It is rare to see people recover from a torn ACL and continue to play a sport, but to do it twice is something unthinkable, according to senior Tyler Nelson. There are very few cases where someone goes through this, but it requires a lot of hard work. This is exactly what Nelson experienced in his basketball career.

Nelson first tore his ACL the summer going into his sophomore year and he didn’t know what to expect. It was like any ordinary practice and everything was going well until he was running up the court.

“I was at a practice and was dribbling the ball and I heard a popping sound,” Nelson said. “I was pretty confused because it has never happened to me before and I didn’t know what it meant.”

The next nine months consisted of surgery and physical therapy almost everyday, according to Nelson. Due to the timing of his injury, Nelson had to sit out his entire sophomore season and couldn’t play any basketball for South. Following his nine months of recovery, the unthinkable happened. Nelson was playing in an Amateur Athletic Union (AAU) game and jumped to catch a pass. As he came down, he fell in an awkward way and when he stood up, he knew something was not right.

“I knew what happened when I was on the ground and I wasn’t surprised,” Nelson said.

After the second time he tore his ACL, Nelson questioned whether he should continue to play basketball. He had to sit out his junior season as well. He was unsure whether it was worth it to do the same long process again and have to wait even longer to play again.

“There were times where I didn’t want to play and wanted to be done with it,” Nelson said. “Ultimately, I decided to do more physical therapy and [try to play] again.”

The South basketball team’s head coach, Phil Ralston, was inspired by what Nelson went through and excited that he decided to still be on the team this year.

“What a great feel-good story it is, to have a young man who has battled against adversity,” Ralston said. “Not many kids would try to make those attempts because it was a long, hard struggle to get where he is today. I have never seen a kid who has missed two full years of basketball and be able to do what he has done so far this year.”

Nelson’s will to keep practicing led him to get a pivotal role on the team this year and being one of the top shooters, according to Ralston. Now, Nelson takes more precaution with his knee because he knows another injury could be the end of his career.

“I have been stretching before and after each practice and game because before I tore it I never stretched,” according toNelson.

His positive attitude and hard work ethic throughout his unusual path is what led him to be a key player for the varsity team this year according to Nelson. He hopes his message will help athletes who are doubting to continue doing  something they love because of an injury.

“Just always stay positive with it and if you work hard during your physical therapy process then you should be confident in how you perform when you return to a sport,” Nelson said.

Nelson has spent his senior season helping to bring wins for the Titans, who are currently 17-7.