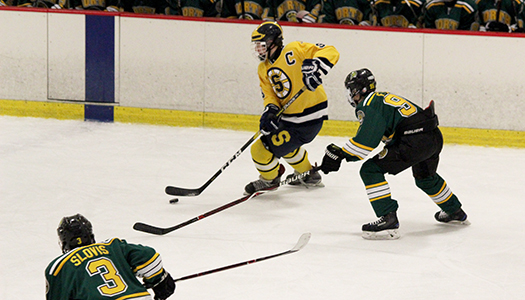 Sprinting across the ice pursued by a North player ready to defend, junior Theo Papalas stays in control of the puck. The boys lost to North 2-5 on Nov. 21, but plan to make changes in their game in order to make it far in the playoffs, according to senior Max Abramov.

Young, but anxious. That is a common theme with the South boys’ hockey team this year, according to senior Max Abramov. With only three seniors on the team, junior Joe Young says their goal is to create a strong team chemistry for the future. Even though the team is off to a rough start this year after their stinging loss to Glenbrook North, according to Young, the team is looking to bounce back and hopefully make a far run in the playoffs.

The famous North versus South game on Nov. 21 did not go as planned for the Titans, as they lost 5-2. Young says they had very high expectations and were hoping to win since they haven’t in a long time.

“The history of the game is just so hype and it is so rowdy,” Young said.

Although it was a tough loss to their biggest rival, the team is looking to learn from their mistakes and be ready for the rest of the season, especially for Abramov.

“Our performance at the North-South game didn’t accurately show our skill,” Abramov said. “We have a lot of potential.”

Since they are such a young team, they want to learn how to fix little mistakes such as puck control, Abramov says.

Young said, “[We are] trying to figure everyone out [while] creating [team] chemistry for the future.”

The team has so much potential and talent for next year, and creating a tight bond of players will help strengthen their performance, according to Young. While other teams have a greater number of seniors leading their team, South counts on their younger players and has high hopes for the next season because of this.

As far as this season goes, there is still a good chance they will go far in the playoffs, according to Abramov.

“We are [going to] keep pushing and fixing different parts of our game in order to do well at the end of the season at state,” Abramov said.

They might have had a start they are not proud of, but each day they are working on their skill for the playoffs just like they did last year, Abramov says.

“We are working on our one [versus] one battles as well as our powerplay,” Abramov said. “[We are] trying to limit our turnovers by playing more calmly and not throwing it away.”

When these minor tweaks in their game are fixed, the team hopes to be skating through each game with confidence all the way to the state championships.