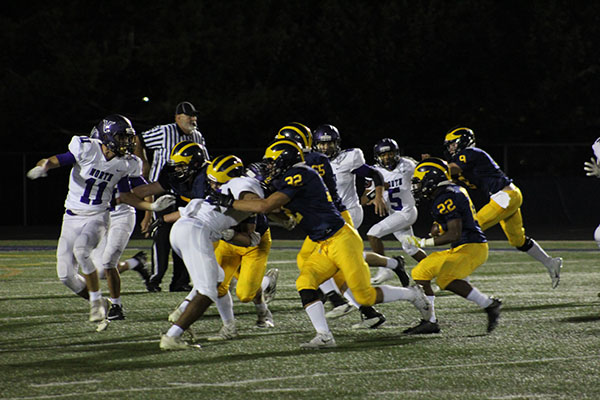 Blocking the Niles North defense, the Titans protect sophomore Zack Herndon (22) as he attempts to score a touchdown. The team played Niles North for their homecoming game on Sept. 21 and won by a score of 41-0.

njury, South’s football team has relied on sophomores and juniors to lead the team, according to Senior Center John Travlos. As they continue to recover and return to the field, Head Coach Dave Schoenwetter believes their 1-4 record will turn into an opportunity to compete in the playoffs.

“It is never an easy task to make the playoffs or honestly to even win a football game,” Schoenwetter said. “Everyone you are going up against is putting in a ton of work and their coaches are doing the same things as us. I am hopeful but I also recognize that it is hard to do.”

To make their playoff goal a reality, the team must win at least five out of the nine games they will play this season, and if they lose on Friday against Niles West, they cannot compete. Travlos believes that in order to make the playoffs a possibility, they need to continue to play quickly and with resiliance.

“We know to have a big advantage we need to be fast and we need to be relentless always,” Travlos said. “When we go into games, we need to strike first, we need to be the ones setting the tone, [and] when situations go bad we need to respond in a tough manner, a physical manner and a fast manner so we can win that game.”

The Titans lost to Palatine on Sept. 7 by a score of 35-28. Jack Jerfita, senior running back, believes the game started well, but missed assignments on defense and fumbles throughout the game are what caused them to lose.

“We played really well, we started to move our offense down the line and score touchdowns,” Jerfita said. “But, we started making mistakes and those mistakes cost us the game and to be an 8A team you can’t make silly mistakes like that and that is why we lost.”

The first win of their season was against Niles North on Sept. 21, when the Titans won 41-0. Sophomore Zach Herndon says the win has caused them to gain confidence when facing off against schools such as Maine South and Evanston.

“We played a very fast-paced game to keep the defense guessing,” Herndon said. “We all finally clicked as a team and played good responsible football. On the defense side, we had great communication and were able to shut down the passing game early.”

As a leader, Jerfita says he continues to remind other players on the team of their goal – to play hard during practice so they can have a good game every Friday night. According to Schoenwetter, he is implementing the message of 1-0 to help the Titans win at the end of the week.

“We are really focusing on ‘one day at a time, one game at a time’ and we just narrowed that down … to being 1-0,” Schoenwetter said. “What are we doing today and what are we doing this week. Each day we are trying to win that day, and each game we aren’t looking past that game.”

With football being in and out of the  national news due to players being overworked, and in the case of a University of Maryland, a player dying due to exhaustion at practice, Schoenwetter ensures he is working closely with the players to make sure they feel safe and healthy by giving them breaks throughout practice. Schoenwetter believes that communication between the coaching staff and players has allowed him to push his players without working them too hard.

“One thing that has changed in football since I played, is that there is a lot closer relationship between players and coaches…and I don’t feel like our players hold back in terms of voicing their opinion,” Schoenwetter said. “Come gameday, we can’t call on kids to do more or  play harder if they don’t really feel like you are invested in them.”

A top competitor for the Titans is Maine South, according to Jerfita. The team is excited to play against them on Oct. 5, according to Travlos, to be able to show that they can compete against bigger teams.

“I want [Maine South] to see that we will play physical, tough, and fast football,” Travlos said. “Yeah we aren’t the biggest team but we [pride] ourselves on how tough we are. We are going to get low, we are going to play fast, and I promise you we are going to be relentless the whole game.”