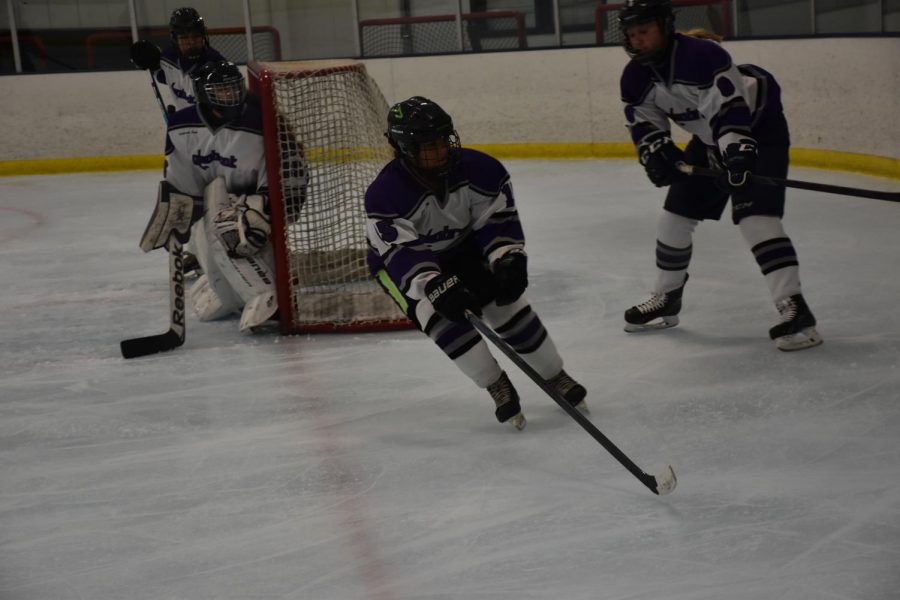 The Glenbrook girls will look to repeat success when they face New Trier at the United Center at state.

Last year, Glenbrook defeated Loyola 7-3 to take the title. Head coach Steve Hamelin says that from that championship year, they have carried over a core of eight senior players and a deep roster, with three competitive lines ready to play.

“We have a very balanced attack, and I feel very comfortable with each and every line,” Hamelin says. “They just have to get out there and compete.”

Junior Shannon Schmitt says they were in a similar position with Loyola as they are now, having played New Trier multiple times during the season and winning some, but losing others.

The most recent matchup, a Scholastic Cup semi-final game on Feb. 24, was a 5-3 Glenbrook win, with a goal scored during their first shift, senior Maddie Itagaki says. However, Abby Wieczorek, who will goaltend for the state game, was not playing. With that adjustment, junior Maddie Dunham says the team will focus on puck movement and taking smart shots.

Itagaki said, “[Wieczorek] just sees the puck really well and we’re going to need to work really hard to get those shots on net. She always gets that pass and doesn’t give up any rebounds.”

In addition to   goaltending, junior Lily Cataldo says the team will need to account for New Trier’s depth and size, which will make their players well-conditioned and well-rested.

Despite their strengths, Schmitt says New Trier’s tendency to play as individuals may hold them back.

“I think New Trier tries to do everything themselves,” Schmitt said. “Each individual person doesn’t always work together whereas when we’re ready to go, [we] talk to our goalie and defensive pair, we do what we have to.”

Communication, Schmitt says, will be key for Glenbrook. In their semi-final game against second-seeded Fenwick on Feb. 26, Schmitt says working as a team and talking on and off the ice helped them finish 1-0, adjusting to a more defensive-minded game after scoring in the second period.

Seeded first, Hamelin says New Trier came into the playoffs as heavy favorites. But regardless of opponent, Glenbrook focused on consistency with their starts and passing throughout the playoffs.

“It’s about being competitive every game, every shift, every period,” Hamelin said.

With deep playoff and state championship experience, Cataldo says she and the team will benefit from reduced nerves and the motivation to repeat their past success.

However, Itagaki says their usual mindset of being physically and mentally prepared and starting strong will remain the same.