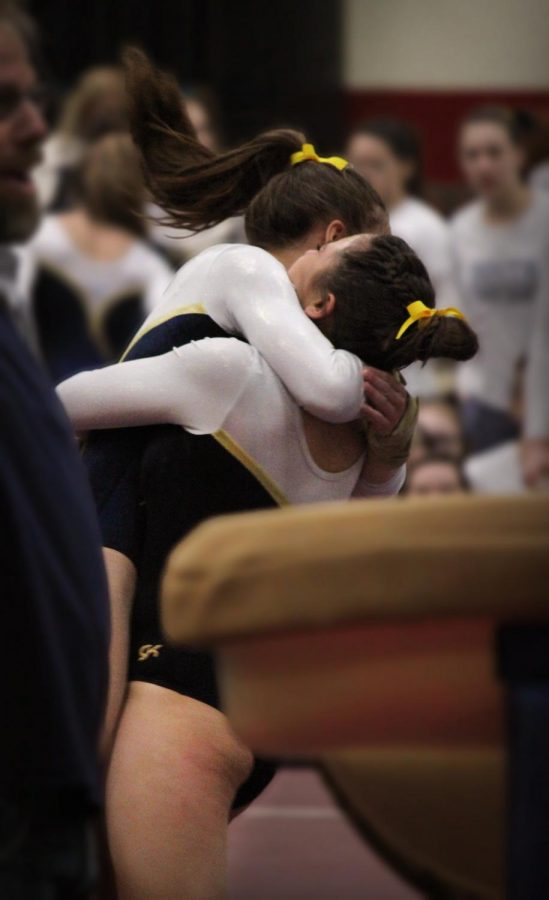 ECSTATIC EMBRACE: Celebrating their win, sophomore Jenna Hartley and senior Bebe Haramaras hug after finishing a routine. The girls went on to place 3rd at state.

The girls’ gymnastics team’s confidence sank as they thought about their performances at the IHSA State Championship meet and waited for results, according to senior captain Bebe Haramaras. Haramaras says the team was disappointed in their routines and were convinced they had scored low. She says she kept her hopes up, because the meet wasn’t over until it was over.

The team claimed third at state, Haramaras says. According to Haramaras, mentality is everything in gymnastics. Self-confidence and determination are the keys to success, she says.

“We have the skills, we have the talent, we [just] need to be there mentally,” Haramaras said. “You know how talented you are, you just need to push yourself in every way that you can in order to be the best you can [be], never stop trying.”

Along with obtaining the right mindset, the team had to go through months of preparation to reach the state championships. According to head coach Steve Gale, the team prepared for state since the start of the season.

“[Preparing for state] started on the first day of the season,” Gale said. “We have a very talented group of young ladies on the team, and from day one we were focusing on execution, cleaning up our routines, making sure we have met requirements and staying focused on the big picture.”

Gale emphasizes the importance of worrying about oneself when competing. Gale says he believes if one does everything they are supposed to, success will follow.

“As I’ve been telling the team all season, if you do your routines and do your job, good things happen,” Gale said. “Don’t worry about what other teams look like during warm ups; you don’t win warm ups. You go [out] there and you do your job.”

Sophomore Jenna Hartley says Gale’s instructions affected her in a positive way. Hartley believes she performed at her best because she kept her focus.

“[At the state meet], floor was the last event and I was the last person to go, so everyone was watching me,” Hartley said. “I [ended up] doing one of my best routines of the season. Our coaches always tells us to not worry about the scores and what other people are doing and to just focus on yourself.”

“It was such a rush emotionally to win regionals, I was very happy for the girls,” Gale said. “At regionals we took all five of the places on beam, which was special. [As for sectionals], edging New Trier was a surprise. We didn’t have our best meet; it was good but not our best, so that was a real rush.”