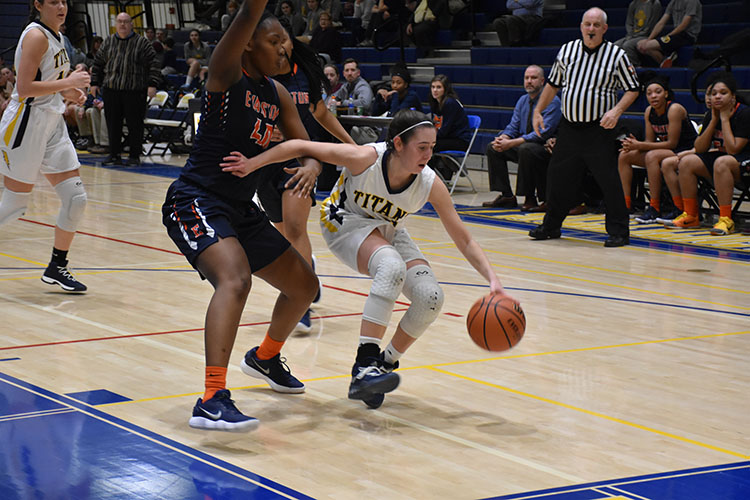 HEAD IN THE GAME: Driving past an Evanston defender, senior Lizzy Shaw dribbles on the Titans home court. The Titans fell to the Evanston Wildkits 54--31.

The GBS women’s basketball team has returned to the courts and is ready for a season full of layups and alley-oops. With the season underway, the team’s excitement to play is clearly represented by the smiles on their faces after a fellow teammate shoots a winning basket, and their confidence gives them high hopes for this year’s outcomes, according to junior guard Libbie Vanderveen.

About 25 girls attended tryouts for the varsity basketball team this year, making it a new record high for tryouts, according to head coach Steven Weissenstein, who has been coaching at South for 29 years. Now, with every available spot filled, the bar has been set high for this year’s possible outcomes, according to Vanderveen.

“We’re all committed to the team and want to win every game,” Vanderveen said. “We all love playing together and when we get into a game it’s hard to stop us. I think we’re going to do very well this year.”

Players are putting in the hours that require an immense amount of commitment to the sport, according to junior guard Makayla Stadler. Practices, games and tournaments, Stadler states, are exceptionally time-consuming throughout the majority of the season.

“It takes up a lot of time, and I normally don’t get home until 6:45 on most practice days,” Stadler said. “Game days take up a lot of time too, because we have to get to school to run over plays before we leave and the bus rides take a while.”

Practices take up a majority of each player’s day, but when participating in games against rival teams such as Evanston, Main South and New Trier, there are still basic skills that each player lacks, according to Weissenstein. After witnessing multiple common mistakes during games, Weissenstein has noticed the team’s room for improvement as a whole, not just as individuals.

“The thing that really separates good teams from great teams is they don’t miss layups. We miss a lot of layups and we continue to miss layups and it’s the easiest shot in basketball,” Weissenstein said. “So we’ve got to do that better, and we’ve got to shoot free throws better. There’s a lot of things we have to work on between now and the end of the year.”

While the team may struggle with layup and free throw shot consistency, according to Weissenstein, there’s a method that allows the players to review their mistakes after a game, enabling them to gain an understanding of how they can improve their playing capabilities in future games.

According to Vanderveen, games and practices are time-consuming but being a part of the team is a great experience.