Itagaki commits to Rochester Institute of Technology for Hockey 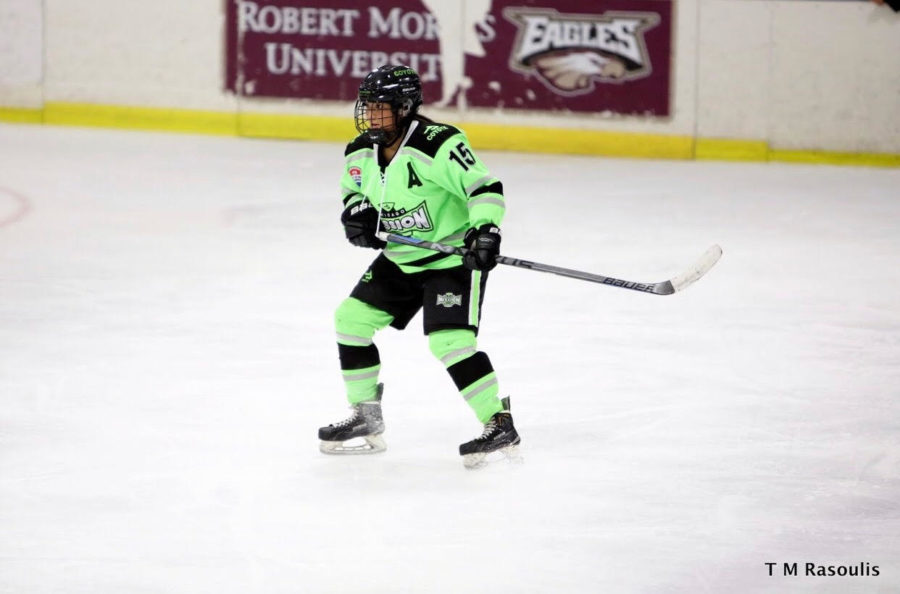 Senior Madison Itagaki skates across the ice and shoots the puck to score her team’s game-winning goal. Her team skates over to her, and they all celebrate the win together. Itagaki’s Chicago Mission hockey team is usually number one in the country, according to Itagaki.

Itagaki is a Division I hockey commit, along with ten other girls on her club team this year. They are all excited for each other and encourage each other on and off the ice, according to Itagaki.

“Everyone [is] just so supportive of everyone, [and always saying] congrats,” Itagaki said. “Everyone is happy for [the commits].”

Itagaki says she believes her coach for the past five years, Tony Cachey, has helped her become the player she is today. He has continuously encouraged and pushed her to do her best over the years.

“He has helped me develop in positive ways that have affected me and [major parts] of my play,” Itagaki said. “He built me as a player and did all the right things.”

Cachey says Itagaki, along with her teammates, work hard each day and push themselves to win each game. Their hard work and dedication has allowed them to have the opportunity to play Division I hockey.

“[Itagaki] has grown into playing at the highest level,” Cachey said.  “It’s been a process, but she’s climbed the mountain every day.”

According to Itagaki, she faced a difficult decision when choosing which college she wanted to be playing hockey for. She had to start thinking about college much earlier than her classmates and considered the schools’coaches, facilities and student life, Itigaki says. Ultimately, Itagaki verbally committed to Rochester Institute of Technology at the beginning of her Sophomore year.

“At RIT, their football team is like the hockey team, and their facilities are basically brand new,” Itagaki said. “The guys’ program is super big there too, so I just think it’s cool.”

Itagaki’s mother, Lori Itagaki, says she is ecstatic for her daughter to be playing hockey in college. Lori says she is happy her daughter’s hard work and commitment has finally paid off.

“Her dad and I felt a sense of relief. All our hopes and plans for her over the past 14 years [have] finally come to fruition,” Lori said. “With all the hard work and skills she learned, we are looking forward to her puting it to good use.”

Lori says she admires how much her daughter has grown as a person and player over the years. She is able to use what she gained on the ice, off the ice as well. Without hockey, she would not be the same person she is today, according to Lori.

“Playing hockey has given [Madison] a great sense of pride and self confidence,” Lori said. “She has developed lasting friendships and leadership roles. As the saying goes, ‘Play for the name on the front of the jersey and they will remember the name on the back.’”

Lori says she wishes her daughter best of luck in continuing her journey to play D1 hockey.

“A little piece of advice for our daughter… play every game like it’s your last [and] hold on to the life lessons you have learned along the way,” Lori said.