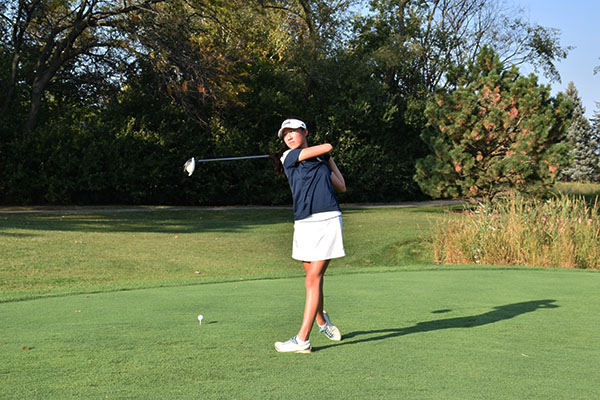 Taking a practice shot, senior Sophia Lau finishes her swing with a follow through. Lau competed with the rest of her team at state on Oct. 13 and 14.

Junior Hanna Tanaka stood next to the leader boards with the rest of her teammates  on the women’s golf team, waiting for the scores to come in. The sectional meet had just ended, and the girls were on the brink of qualifying for the state meet for the first time in 17 years. The scores popped up. Tanaka looked over at junior Kaki Feerick and started crying tears of joy, hugging her teammates, as they had qualified for state.

The girl’s strong performance in the sectional meet helped them make Glenbrook South history, according to Tanaka.

“I played the best that I’d played all season and so did [freshman] Maria Perakis,” Tanaka said. “It was that one moment we saw the totals tallied up and we saw that we were the third to make it to state.”

Head Coach Jeff Paek’s ultimate goal for the team was to make it to state though it seemed like a reach at the beginning of the season. The girls’ outstanding performance throughout the regular season and the postseason series helped them to achieve their goal, which hasn’t been done at Glenbrook South since 2000, according to Paek.

“It was really a great accomplishment for the girls,” Paek said. “Beyond the golf, it was really great to see the girls come together as a team in such an individual sport.”

Although this was Paek’s first year coaching, he is regarded as a strong leader and role model by his team. Paek created a strong learning environment and provided a balance of fun and work in practice, according to Tanaka.

“This was his first year coaching, but if it was any other coach I honestly don’t think we would have made it as a team to state,” Tanaka said.

Perakis wasn’t sure what to expect going into her first season, but she managed to maintain a level of consistency throughout the year. Perakis’ play was crucial in helping the team to qualify for state. Perakis, along with Tanaka and senior Sophia Lau, were the foundation of the team in every match, according to Paek.

“I’ve never really been on a golf team before and golf was such an individual sport for me,” Perakis said. “I wasn’t used to having teammates surrounding me but it was a lot more fun that way and a lot less pressure.”

As one of the team’s goals, they participated in a “golf-a-thon” to raise money for hurricane relief. This year, they raised $1,000 for hurricane by playing golf and collecting money through the week.

Aside from qualifying for state, another goal was for the girls to become stronger mentally.

“[Paek] helped me a lot with my mental game,” Perakis said. “He knows what I want to hear so I don’t worry as much and I play better.”