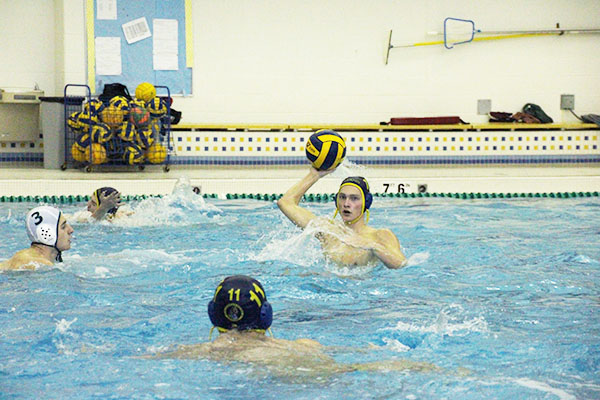 Polo passin': Senior leader, Tucker Nienhaus, looks to fellow teamates for a pass during the Titans’ match against GBN on April 11. The Titans defeated the Spartans 19-10.

After a close loss to New Trier in the Sectional final last year, the men’s water polo team looks to strong senior leadership and younger players to step up to the plate  this season, according to head coach David Lieberman.

The team has five strong senior leaders, and there are many talented sophomores, according to Lieberman.

“We’re younger, and I think our seniors are a little bit more easy going,” Lieberman said, “Our juniors and sophomores are skilled [and] willing to partake in learning the leadership of the sport and the team. Also […] they are willing to listen to the seniors, so…there is less drama than there has been in the previous years.”

“You are with most of the same guys for five months in a row,” Nienhaus said. “Most of the younger guys, you know from the swim season.”

Although many of the players know each other, there are some that do not do swimming like senior Odysseas Lazarou, who moved to Glenview from Greece in the beginning of the year. Lazarou said that he had been playing club water polo for seven years. In Greece, Lazarou qualified for tryouts for Greece’s national team.

“Two years ago, I got called for the tryouts for Greece’s national team,” Lazarou said. “I didn’t make it, but it’s a big thing because [water polo is] very popular in Greece.”

Lazarou said that the only big difference from water polo here than in Europe is that it is less aggressive.

“All the guys are great,” Lazarou said. “They are friendly towards me, so it’s pretty easy.”

Despite the team’s  strong bond, according to sophomore Ryan Meyers, the team still has some areas to work on throughout the season to have a better chance at making it to the Sectional finals.

“I would say that we need to work on our communication,” Meyers said. “I think it just comes down to being more alive in games and just being able to connect at certain moments better because we have a lot of individual talent.”

Even though the team has some things to work on, Lazarou said, they have played teams like New Trier and know what they need to fix. According to Nienhaus, the men lost to New Trier 16-10 on April 6, but have many other opportunities to play them.

“[The] game went a bit better than we expected,” Nienhaus said. “We knew we had a hard game going into it, and we played fairly well.”

Nienhaus noted that Loyola Academy’s men’s water polo team is also a major competitor for the Titans and GBS has always had an on going rivalry with them.

“Up until last year, the only time we had beaten them was the year when we went to the State tournament,” Nienhaus said.

Nienhaus and Meyers hope to not only improve as a team, but potentially make it to the Sectional finals in May.