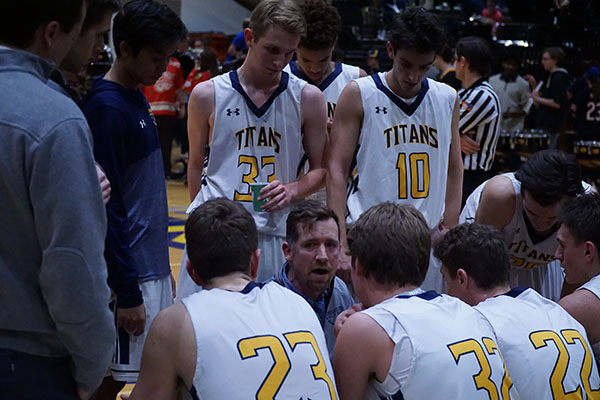 move it, maine south: Getting ready to take the court, head coach Ben Widner encourages the Titans during a timeout (left). The Titan’s played against Maine South on Jan. 27 and lost the game with a final score of 56-44.

The 2016-2017 men’s basketball season has a current record of 8-10 and is rapidly improving as the playoffs continue, according to head coach Ben Widner.

“We are getting better every week, which is kind of our focus,” Widner said. “I think we are moving in the right direction, and there has been improvement throughout the season. The level of the competition just keeps on getting better and better as the season goes on, [so] it’s important for us to keep growing.”

The Titans recently played Palatine High School on Jan. 21, winning by a score of 62-58 in overtime, according to senior Captain and shooting guard Matt Giannakopoulos.

Aside from the games, the men have created very close bonds with each other, even with a mixed team of seniors, juniors, sophomores and one freshman, according to Giannakopoulos.

“We’ve been playing lots of tough games, so it helps that we’ve had such a close team this year,” Giannakopoulos said.

According to Widner, the seniors on the team have been great leaders, which has really contributed to the team’s overall cohesiveness.

“[The Seniors] have led in multiple ways: emotionally, verbally and by example, which has been really helpful to the overall commitment and focus of the team,” Widner said.

Similar to Widner, Giannakopoulos agreed that the leadership roles the seniors have within the team are an  important part of how the team has been playing.

“[Leading] by example is important, [especially] in the offseason getting to the gym first and competing in every drill and [also] talking to the guys about staying competitive,” Giannakopoulos said.

Giannakopoulos attributes the team’s good leadership to not only the players but to the coaching staff as well.

“[Widner] is really helpful on picking up on people’s moods during practices or games,” Giannakopoulos said. “He helps [us] to get focused on the game and stay focused, so we can have the right mindset going into each game.”

According to Giannakopoulos, the losses this season have helped the team refocus and keep improving.

“Some of our losses have been really close,” Giannakopoulos said. “We’ve really had that extra focus that we’ve [needed] to beat [certain] teams.”

According to Giannakopoulos, the team’s past games against New Trier helped them to discover their weaknesses that needed to be improved on to maintain consistency on the court.

On Feb. 3 the Titans fell to the Niles West Wolves by a score of 52-46. Senior Chase Thomas attributes the loss to an inability to adjust to the Wolves technical skills, something the team has struggled with throughout the season.

“We didn’t respond to [the skill] adversity very well, and that’s something that we have been trying to work on since the start of the season,” Thomas said. “If we want to finish strong this season we have to play as a team.”

According to Thomas, the Titans hope to do better in future games. They will next hit the court tonight in the dome against the Evanston Wildkits.