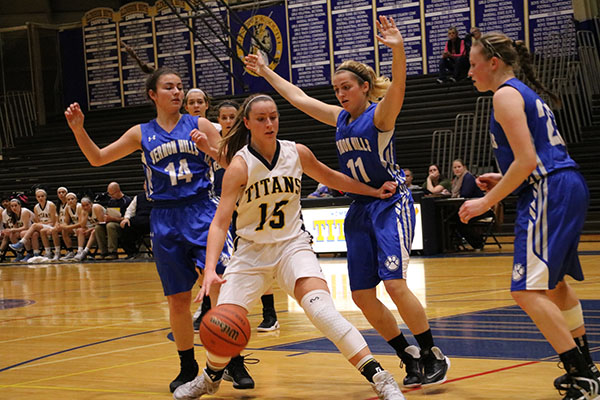 Blocking two Vernon Hills defenders, senior captain Carie Weinman (left) dribbles the ball and gets ready to shoot a layup. Extending her arms past the defenders, Weinman (right) launches herself to complete the layup; the Titans beat Vernon Hills on Nov. 29 by a score of 46-40.

“We had really good defense [in the Grayslake North] game,” Weinman said. “We got a lot of steals, which created easy baskets for us, which is awesome.”

“The biggest thing that we have to do is create points with our defense,” Weissenstein said. “I think we have to become a really good, pressuring, full-court team, which will be able to create a lot of turnovers, which in turn will create a lot of easy points for us offensively.”

Although Weissenstein is not big on setting goals, he hopes the team will improve every day in practice and refine their game to the best it can be, according to Weissenstein.

“If we get better every day in practice, I think wins and losses take care of themselves,” Weissenstein said.

“We knew it was going to be a hard game, but we were expecting to beat them because we knew we wanted [the win] more,” Weinman said. “We really want to win conference, so it was one of our goals to beat [New Trier].”

Similar to Weinman, senior starter Carolyn Kuhn notes that the Titans stayed composed throughout the whole game, which is why they overcame the Trevians.

“Going into the fourth quarter, we were down by six [points], so we knew we had to play really hard,” Kuhn said. “I think our patience and composure got us the win. Many teams would fold going into the last quarter losing, but we outhustled them.”

Last year, the team finished the season with a record of 25-6. They also made it to the Sectional final, where they lost 39-23 against Trinity High School, who was third in State.

Weissenstein sees a lot of potential in the team this year, especially in players like senior Callie Pekosh, who is a great all-around player, and Shaw, who is an amazing point guard and leads the team, according to Weissenstein. Other influential players include senior Gabby Amesquita, Kuhn, senior Megan Dillon, sophomore Makayla Stadler and sophomore Libby Vanderveen.

“We have Carie Weinman, who, if she’s not the best player in the state, she’s [definitely up there],” Weissenstein said. “We’ve got some new girls who are going to contribute a lot, so I’m very excited about what’s going to happen this year.”

According to Weinman and Shaw, Weissenstein is a very experienced coach who knows what to do both on the court and in practice. He knows which plays to run in certain situations, according to Weinman, and he makes sure that each and every player is contributing to the success of the team. According to Shaw, he is close with all of the players on the team.

“He’s a very experienced coach, so he knows what he’s doing,” said Shaw. “He’s really good at knowing the players he has and how to make the team work and what we need to do to be successful.”

According to Weissenstein, the team is very motivated for the season ahead. The team has been spending a lot of time together and hope to have a lot of success in the coming year.

“They want to be there, they work hard, they listen and they compete, so it’s a lot of fun working with them,” Weissenstein said.