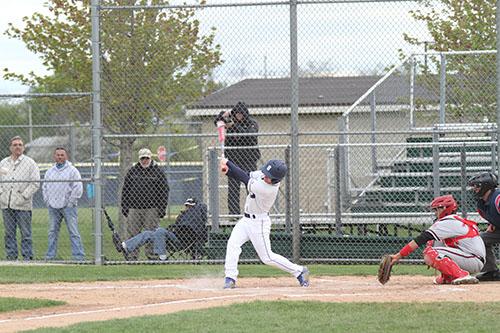 The men’s baseball team is currently tied for first with Evanston Township and New Trier for the conference title. Winning conference was a season-long goal for the Titans, and they are now shifting their focus and intensity to prepare for the playoff series which began May 27*, according to senior pitcher George Karavidas.

The men were originally tied with Evanston for the conference title but lost to Maine South on May 21. The men played an  extra two innings but ended the game in the ninth inning losing by a score of 5-3. According to senior Jack Molitor, while it was a tough loss for South, he felt the team played well overall. Karavidas pitched for the first seven inning and recalls the suspenseful nature of the game.

In the first round of playoffs, the Titans are scheduled to play either Round Lake or Buffalo Grove, depending on the winner of their game. According to Karavidas, he predicts that the team will play Buffalo Grove.

On Apr. 22, the men played rival GBN, winning 11-10. While the Titans went into the seventh inning winning with a score of 6-2, North managed to make the score 7-10  by the end of the top of the inning. According to Karavidas and Molitor, the men put up an incredible rally and came back at the bottom of the seventh to win the game from a hit by senior Ben Samborn.

“It was crazy; everyone was going nuts [during the seventh inning] in the dugout [and] screaming as loud as we could,” Molitor said. “Once Ben Samborn got the last hit, we had a huge dog pile behind the first base. It was a lot of fun.”

According to senior Connor Pauly, he felt the team’s 7-6 victory against Libertyville at the beginning of the season jump started the men’s season.

“It was a long game, [and] it was a close game,” Pauly said. “I think we really competed [well] in that game, [which] really started our confidence boost to win conference.”

Pauly said that key members of this season’s team include senior Fitz Stadler, junior Jordy Libman, senior Mikey Henderson and Karavidas. Pauly believes this season’s biggest advantage for the team has been the pitching by Stadler, Pauly and Karavidas with Libman and senior Robby Nelson being utilized as relief pitchers.

“The thing that is different now is that everybody [has confidence], [and] everybody knows what they can do,” Karavidas said. “The [change] we are going to have to make now is putting everything together and making sure everybody does [their job].”

The Titan’s first playoff game was May 28, and depending on the results, the men’s next game will be tomorrow, May 30.