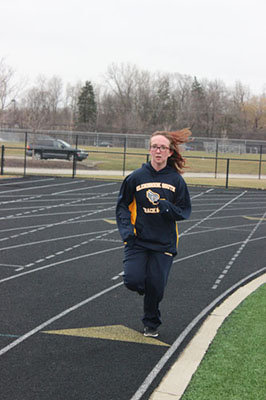 After placing fourth in the indoor conference meet on March 20, the women’s track and field team is hoping to improve on their team spirit and

chemistry to help them in the outdoor season.

Senior captain Anastasia Athas said due to the track team having so may people and being separated by the events, it is difficult to do things to bond

“Usually before the big meets we try to get together and have a pasta party,” Athas said. “It doesn’t always work because there are so many people.”

On Feb. 28 the women participated in the John Davis Relays in which they placed second. The team placed first in events such as The Field Event

Studenroth says she was surprised with the results of the team’s overall placement in the Relay.

“We did not expect [second place] at all,” Studenroth said. “We thought we were going to [place at] the bottom like always.”

For Athas, the John Davis Relays was memorable because it was the first time in the 13 years the Relay has been held that Athas and the other

Titans jumpers won all four of the jumping events.

According to Eenigenburg, the week of spring break between the end of the indoor season and the beginning of the outdoor season was a good time

“After running so much constantly, it was a good transition between [the] indoor and outdoor [season],” Eenigenburg said.” We were still expected to

do our own spring break workouts, but they weren’t as intense as indoor.”

The outdoor portion of the season started the first day school resumed after break. According to Studenroth, adjusting wasn’t difficult for her and the

distance runners because they had run outside during the indoor season. Athas says that the wind influences the approach a jumper uses.

“It’s definitely different getting out on the track with the wind and everything,”Athas said. “It makes it a little more difficult, but it’s definitely the

challenges we are willing to face [to] get better.”

Studenroth says that this season the team has a very strong set of underclassmen. Some of these key underclassman include junior Shannon

The girl’s next meet will be the Titan Invite on April 30 at home.

The men’s track and field team captured the first place title at the Fenton Invite for the eighth year in a row on March 1.

mindset which carries through to the outdoor season.

“Our coach, [Kurt Hasenstein], says that Fenton’s like the beginning of the run towards [the] outdoor [season],” Pilliod said.

Senior Sean Alexander believes that the team’s ability to repeatedly win the Fenton Invite represents the kind of team the Titans are.

“It just [kind of] proves that we can come back year after year and put in a good track team and perform when we need to,” Alexander said.

South placed fourth in the indoor conference meet on March 21, which ended the indoor season. According to Pilliod, he wasn’t pleased with the

fourth place ranking. Pilliod believes a contributing factor to getting fourth was a sense of exhaustion during the meet.

Because the outdoor season had started after the return from spring break, Alexander’s main concern with the transition from indoor to outdoor has

been the cold weather.

“I’m expecting it to be really cold a lot of the time,” Alexander said. “[We] just [have] to push through until it is warm in [mid or] late May.”

Alexander believes the weather will show who on the team is truly committed.

“Nobody really likes [the cold], but I think we will see who steps up and helps us out in our big conference meets that we are going to have in the next

According to Alexander, the team aims to win conference and send as many athletes as possible to state. Pilliod says the team has been trying to

achieve those goals by increasing their workout intensity.

“Something that I’ve noticed is that we’re doing harder workouts than it seems like we have in the past, which is a good thing,” Pilliod said.

According to Alexander and Pilliod, key members of the team include seniors Michael Gentile and David Harris as well as junior Peter Wassmann.