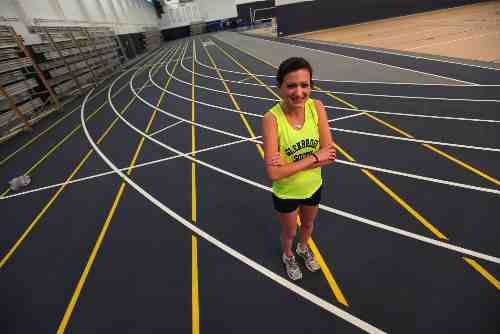 According to coach Fred Kocian, DeVito had the best cross country season of any girl in Glenbrook South history.

“I had my eyes on it for four years so it was exciting,” DeVito said.

According to senior Haleigh Haffner, DeVito, who was on varsity since her freshman year, qualified for sectionals as an individual all four years.

“It’s harder to qualify individually and being able to was a huge accomplishment,” DeVito said.

Through cross country and track, DeVito has found a running strategy that works best for her. According to DeVito, she improved two minutes since freshman year, when her three mile time was 19 minutes.

“I usually try to start off slower for the first mile and then pick it up the last two miles,” DeVito said.

According to DeVito, she found out-of-school races to run after the end of her season through brochures and online advertisements.  DeVito particularly remembers the Nov. 26 Footlocker meet in Kenosha, Wisconsin where she placed 36 out of 346 runners and was the sixth girl finisher from Illinois.

“The course was tough because it was all hills,” DeVito said. “Usually, we run on flat courses but I thought I did a good job overall.”

DeVito also ran in the Nike Cross regional meet outside of school, placing 18 out of 200 runners.

According to Kocian, top runners from around the state of Illinois raced in the MidEast Senior Cross Country Championship through invite only. DeVito placed 13 out of 48 runners, helping Illinois tie for first place.

“I was definitely happy about it because it’s a challenge and to say I was thirteenth is a huge accomplishment,” DeVito said.

DeVito explained she was interested in Bradley University and contacted Bradley coaches with her race times and information.  The coaches responded by recruiting her and offering a scholarship to the university.

“I am excited to run in college,” DeVito said. “It’s a whole new level of competition and I’m excited to be a part of that next year.”