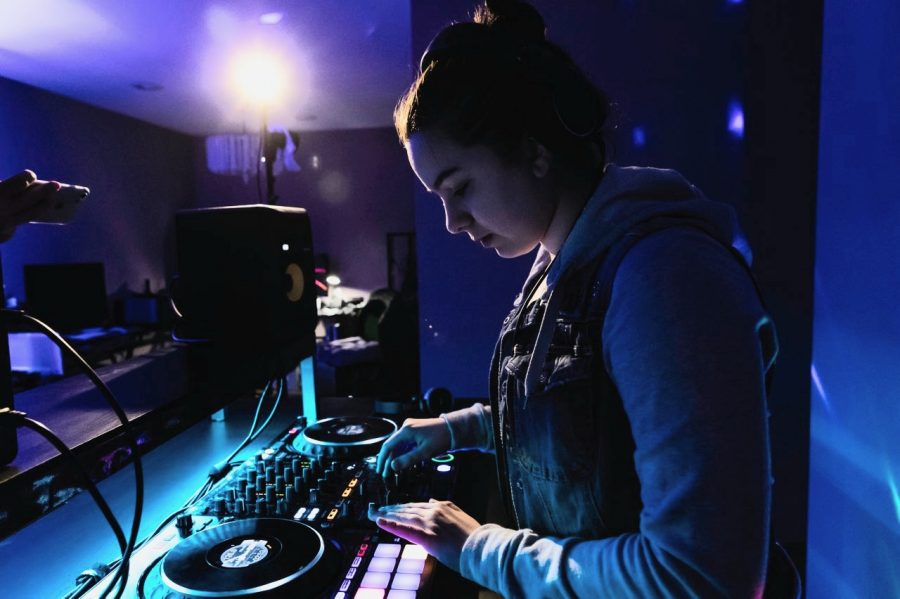 Chilling with Choumiatsky: Creating music on her DJ controller, Choumiatsky was first interested in DJing in seventh grade. She has plans to produce music as a hobby in the future. Photo courtesy of Svetlana Choumiatsky

As South’s seniors begin to look towards a new chapter in their future, they are also faced with many uncertainties about the possibilities ahead. However, for some seniors who are immersing themselves in the field of music, they are diving into this unpredictable, yet exciting future with a heart set on pursuing the music that brings them joy and fulfillment.

One such senior is Riichiro Fujiki, who plans to major in Jazz Trombone Performance at DePaul University. Fujiki initially came to realize that he wanted to pursue a career with this instrument when he first heard his trombone teacher’s trombone playing. Since then, Fujiki chose to stick with jazz as a genre for its ever-changing nature and the deep history of its roots.

“Jazz has so much history behind the music starting from the [segregation era] that Black people faced,” Fujiki explained. “Also, the different genres within jazz are very important. It started with Dixie style like Louis Armstrong then it moved to Bebop which is another subgenre within jazz started by Charlie Parker and Dizzy Gillespie. And then that kind of branched into other genres like Cool Jazz, Fusion, and even now, it’s developing as a genre. That’s what I like about jazz. It’s constantly changing and it’s always evolving.”

Like Fujiki, senior Stephen Jang has decided to study Oboe Performance at DePaul University. In his experience, it was not easy to commit to a career path many view as “unconventional,” despite the love he had for music. Nevertheless, Jang stuck with his heart.

“For a long time, I thought to myself, ‘Should I do psychology or music?’” Jang said. “Even though I might not financially make as much as everyone else, I think I’d rather do what I enjoy, and I know for sure now that I definitely enjoy playing music. So yes, there were many moments where I doubted this path and I got hesitant, but I think at the end of the day, I stuck with what I love doing and enjoy.”

Likewise, senior Svetlana Choumiatsky had to confront this question when deciding her field of study, Music Business. Her interest in music as a career path first started when her dad brought home a DJ controller in seventh grade. Since then, she has been finding a way to combine her love for music production and her interest in the business. For her, studying Music Business at the University of Memphis was the perfect fit.

“Originally, it started with me wanting to be a music producer, but over time, I saw that it’s something I liked but I didn’t see myself doing it as a career,” Choumiatsky said. “And then I found out that there are jobs under Music Business which kind of puts my backup [choice] of business into music, and to me, that sounds like the perfect mix of what I want to do.”

For Choumiatsky, school activities such as the Glenbrook Symphony Orchestra (GSO), for which she is a violist, have been an outlet where she can explore different aspects of the music industry.

“Especially within the last year, we started doing a lot of movie-related music,” Choumiatsky said. “Some of it, I’ve never heard it before and it’s really different and new compared to pop music, and it’s just really interesting. I’m researching and learning a little more about movie music.”

Similarly, Jang has found that his time in high school has provided him the opportunities and people that he needed to experience a musical growth spurt. One particular mentor to this journey has been Kristin Meyer, program director and conductor of the GSO.

“I remember when I was so nervous I couldn’t even play my instrument during my concerto, I was freaking out,” Jang shared. “After the rehearsal, Mrs. Meyer just took me [aside] and said, ‘We’re going to sit here in my office and we’re going to work on this until you get it.’ And she taught me so much in that one moment in that one room and I’ll never forget it. She has done so much for me, and I couldn’t thank her enough.”

With supportive mentors behind their backs, Jang and Fujiki have both received musical encouragement that has fueled their love of performing. Looking forward to his career in jazz, Fujiki shared a simple yet meaningful line of advice from his teacher that he will hold dear.

“Just in general, for jazz, there’s a lot of theory that goes behind jazz music,” Fujiki said. “You have to know individual chords, scales, and you have to practice all those techniques. But the most important thing he taught me was that it’s really not about the theory and anything else, it’s about creating good music.”