The importance of embracing not being perfect at everything in school 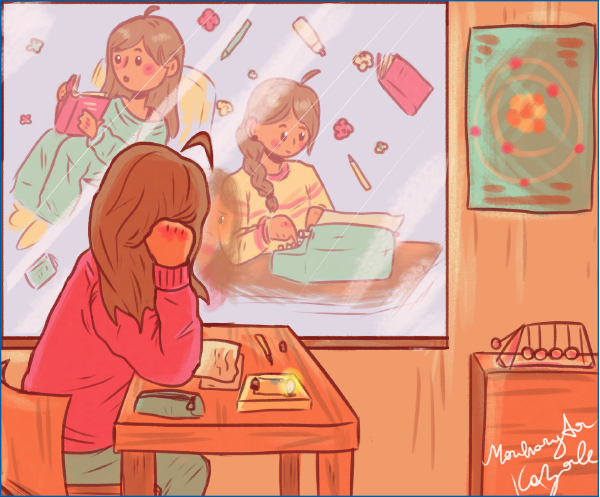 I’ve never been a math person.

I was okay with that fact because I’ve always done decently in math-classes—until I took physics during my junior year.

At first, I thought I could do as I had always done: study if things got hard, and bs my way through the class. It worked and I continued to put myself through long nights of studying, until I realized that it really didn’t matter.

People always say “Try your best and you’ll succeed,” and if you fail a bunch of times along the way it’s still a part of success! Just keep trying and you’ll do well in school because success is always measured by grades in every single class, right?

Try applying this logic to every area of your life outside of school and you might see that it doesn’t work. And yet, I’ve known so many people who are hyper focused on getting good grades in every subject, when in real life, nobody can be good at everything.

In fact, there are people who are only good at one thing—and you can even make money off doing only one thing—crazy, right?

I thought about getting help and I was always asking for answers from my math-brained friends, but even at the time when I was thinking about this stain on my GPA I couldn’t fathom spending any more time on physics than I had to. I’d seen friends who were constantly stressed about their math or science classes and would go see their teachers during every lunch period and would come back no less stressed. Maybe I’m just lazy, but that sounded like a lot of trouble to go through for something that would be of no consequence after high school.

I’ve pretty much always known that there was zero possibility of me ever doing anything with math or physics in my life. So why should I spend hours worrying about a numerical representation of how much I did not care for a particular subject? I did well in the subjects I was interested in, and it was so much easier to spend time on things I enjoyed, such as English and History.

I didn’t have to be perfect in school, even though I am one of those people who are good at “school” and not at “sports,” and that completely changed the way I looked at physics. A grade is supposed to measure how well you understand the content, and if I didn’t understand physics, what was the worst that could happen? Well, I understood enough to know that the gravity of one bad grade wasn’t strong enough to make a black hole.

Yes, grades do play a part in getting you into college. But any college that can’t recognize that spending time on things that interest you and that will actually help you in the future is better than wasting it on a subject you will never use or like doesn’t deserve your time.

I ended up with a C in physics second semester, which wasn’t that bad now that I think back on it, even though I literally failed both of my semester finals (before a curve). I can laugh about it now. I stopped thinking about how my C would end my future and how I had to be good at everything, because, for real, I don’t.

I do my best to block out my memories of physics (to anyone who likes physics, replace it with a subject you don’t like), but if it taught me one thing, it’s that it really is okay to not be good at everything. If you hold on to those unrealistic expectations of yourself, you’ll stretch yourself so thin that you won’t even take joy in the subjects you do enjoy, because all the space in your brain will be taken up by the subjects you don’t like.

It takes time to unlearn something you’ve been taught about school and I acknowledge that I might’ve made it sound easy to switch your patterns of thought, but it isn’t.

It takes time to tell yourself that it is okay to do poorly in something.

But time is all we’ve got, and I know none of you want to remember high school as “The time I killed myself for an A and still didn’t get into Harvard.”