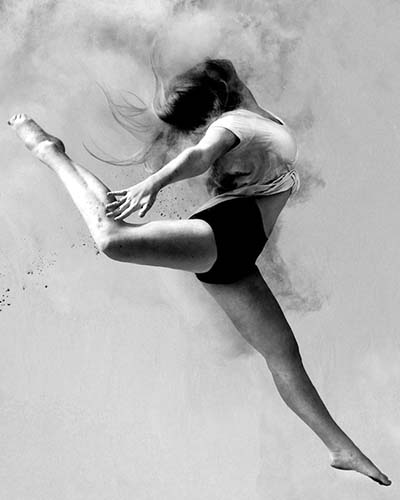 Photo courtesy of Riley Gunderson, AP Art Student who will be attending the Parsons School of Design.

cterized by the drawings and art projects we created. Although many of us color and draw at a young age, very few of us continue it as we grow up. However, several GBS seniors have developed their interest in art into something more and are now committed to art-focused schools or universities with art majors.

According to senior Sam Fuchs, who will be attending Parsons School of Design, she attributes her passion for art to drawing from a young age. This passion only grew as she entered high school in which she began to prioritize her art classes while creating her schedule. When the time came, Fuchs says she decided to only apply to art schools simply because she could not imagine herself attending a traditional four-year university.

Senior Eddie Loughran also says he found his love for art when he was young as he drew the characters from the Godzilla movies. However, Loughran has now committed to the art program at the University of Cincinnati because he still wants to have the normal college experience that is absent at art schools while also having the safety of being able to change his major to something unrelated to art.

“I had considered other art schools but everyone says they lack the college experience [because] there’s not as many sports-oriented things going on there,” Loughran said. “Another reason [I chose a traditional university is because] worst-case scenario, … [if] I drop everything I’ve done these past 18 years and I hate art, I can still go into something else.”

Like Fuchs and Loughran, senior Riley Gunderson began art when she was a child as she grew up with an art room in her home. However, she only considered art as a hobby until she spent more time over the summers focusing on art, which allowed her to realize her passion for it.

“I used to be really, really into academics,  and I would do art maybe once a year, or do it as a hobby, and then I started getting a lot more passionate about it during the summers,” Gunderson said. “That’s when I think I realized I wanted to do it as a career.”

Although Gunderson also applied to two universities at the request of her parents, she knew she wanted to attend an art school, leading her to commit to Parsons School of Design.

Senior Angela Golota discovered her passion for art when she entered GBS as a freshman. She also applied to a few traditional universities but chose to major in Photography and/or Art Education at the School of the Art Institute of Chicago because she had wanted to continue her art.

“Ever since I got into high school, photography classes were introduced to me and I started taking them and I really enjoyed the process [of taking and developing photos],” Golota said. “Before high school, I had always wanted to be a teacher so I thought I could combine [education and art] in a way. What made me decide to go into art school was the fact that I know it’s something that would keep me fulfilled long-term rather than a flash interest in something.”

Golota says that although she also has some concerns about the future, she remains assured about the path she is about to take.

“Obviously, there’s always a fear factor with not knowing how the future’s going to turn out but I’m confident that with going to SAIC, I’ll be doing what I love and positive I’ll be able to get into a major-specific job after college,” Golota said.

Fuchs, like Golota, says that she was once intimidated by the idea of attending an art school like Parsons. However, she is now content with her decision and looks forward to attending the next year.

“I don’t think I would have seen myself at a regular university,” Fuchs said. “I’ve always wanted to do art so I don’t think I would have expected anything different. [But] when I was applying [to Parsons], I wasn’t really sure about the school because it seemed a little intimidating because, ‘Oh, it’s Parsons,’ but now that I think about it, it’s my total dream school. I’m really excited [for it].”