It’s time to reevaluate our language 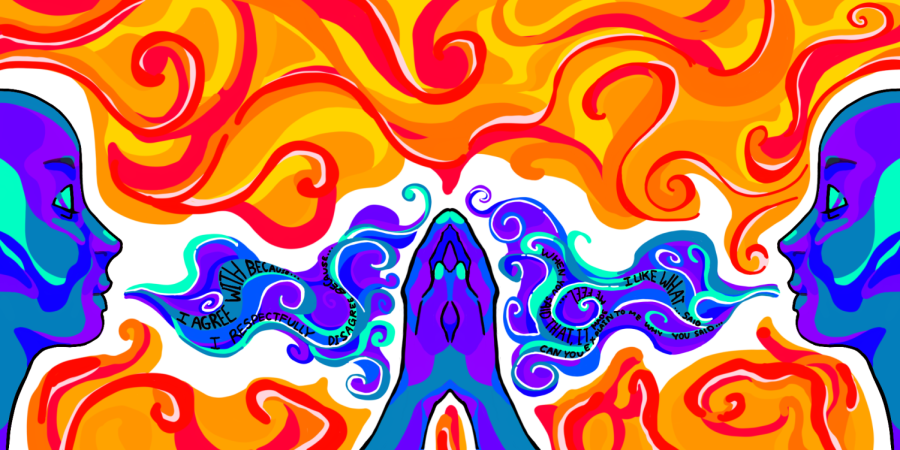 Language has the power to unite society.

Conversely, words can prove divisive and alienating when not used carefully. It is vital that in the classroom, we are considerate of the language we use as refusing to do so denies one the opportunity to gain a better understanding of their peers with different backgrounds and identities.

Throughout the school year, The Oracle Editorial Board has published numerous editorials regarding topics that we feel need to be addressed, including editorials about the use of harmful language when discussing sensitive topics.

Words serve as a representation of an individual or a community, according to English Teacher Dr. Stephanie Bailey, and as such are an influential device that can be used to both benefit and harm.

In the classroom, students experience discussion-based learning, an opportunity that allows students to better understand the varying perspectives of their peers. However, many students  have had negative experiences with discussions in the classroom when students have discussed potentially sensitive content with a lack of empathy.

Discussing sensitive topics lightly, or in a joking manner, while seemingly only slightly inconvenient for the classroom culture, can be upsetting and impacts everyone involved.

The Oracle Editorial Board commends the individuals who have recognized the vitality of healthy language in the classroom and who have made the conscious decision to use a more productive and empathetic approach when participating in discussions. We continue to urge students to consider their language when discussing sensitive topics.

“Language reflects the ideologies of the people who use it, and this is why language can be unifying or divisive,” Bailey said. “Language is a powerful tool that can empower, support, or manipulate.”

Causing people to question their identity or belittle themselves, harmful language is expression that tears down others for their differences rather than appreciating them, Caitlin Reichert, Special Education Teacher and Instructional Coach, explained.

“Harmful and insensitive language devalues a person and their dignity,” Reichert said. “It makes them inferior for having differences instead of being celebrated for who they really are.”

Conversations in class that may surround particularly sensitive topics should not be withheld, but treated with caution and respect.

Senior Maddi Nagel said that negative language used in school is not only harmful but also insensitive.

Nagel noted that when reading No-No Boy, a book with an Asian American protagonist, her junior year, she hoped to have spent more time addressing the racism behind the novel’s language, as she felt uncomfortable with the usage of certain words in the book.

“With my [Filipino] background, some of the language in No-No Boy made me uncomfortable,” Nagel said. “My teacher did a great job contextualizing it and giving us background, but we didn’t talk enough about the racism and I wish we could’ve.”

The Oracle Editorial Board urges teachers to discuss the historical significance and effect of insensitive language in books and course materials, as well as correct students when they use harmful language.

“Any sensitive topic, when it’s brought up, let’s say [in a] novel or a text that’s being used in class, opens the door for discussions to happen and for those teachable moments,” Wolfe said. “Whether it’s ability-based, race-based, [or] financially-based, that ability level [to understand individuals from different backgrounds] comes into play within our conversations.”

It is essential that we as a school reflect on the conversations we have had this school year and understand the importance of a healthy discussion dynamic amongst our peers. Change is necessary in order for growth to occur.

Insensitive language has a negative impact on every individual in the school and negates every student’s right to feel comfortable while openly discussing sensitive topics amongst their peers.