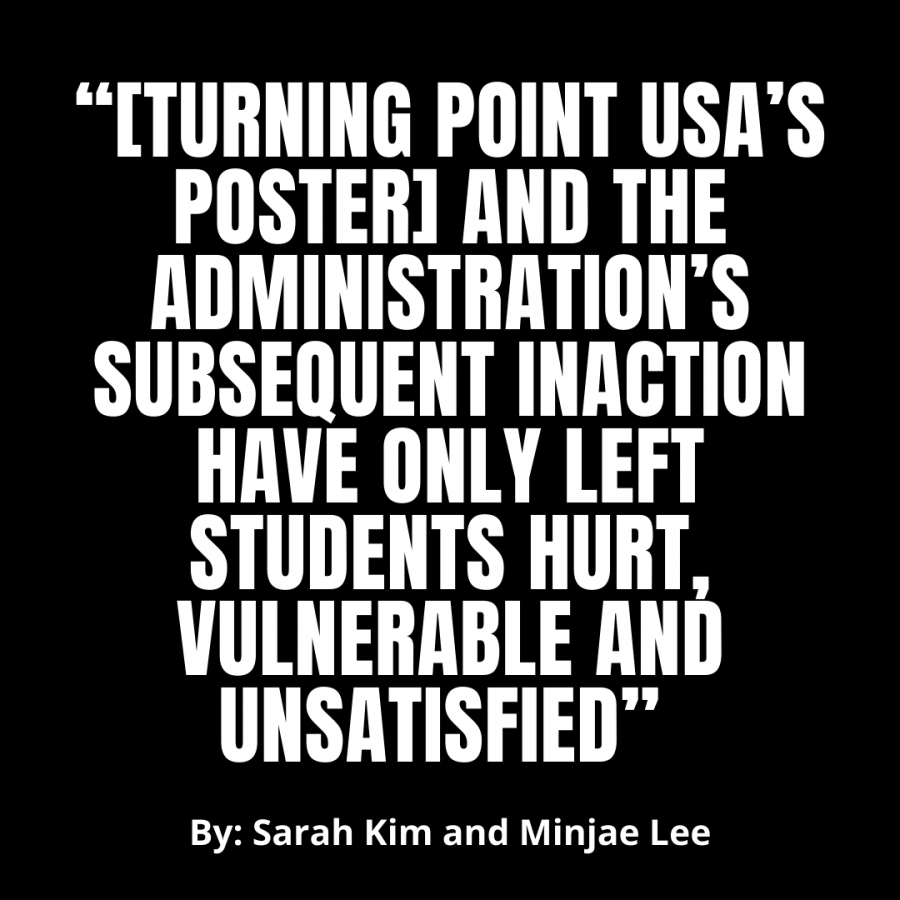 I’ve lived in two different parts of the U.S. in my life, with a short stay in Korea separating the two. When I grew up in Queens, New York, the lack of racism was supported by regular efforts of anti-racism. There were routine multicultural celebrations, such as an annual cultural foods day in which all the students brought foods from their home culture, and jokes of even the slightest racist intent were reported and punished.

However, when I moved to Glenview my freshman year of high school, there was a noticeable difference in the way race was a part of conversation. Instead of actively acknowledging its reality, history and consequences, students and staff assumed the stance that we lived in a post-racial society. The extent of their anti-racism was the inadequate “doing the bare minimum”, and casual speech often integrated racial jokes and stereotypes.

When the Turning Point USA posters were first hung around South on April 21, I was flabbergasted. It not only comprised a title stating, “China kinda sus”, but also a character from a game called “Among Us,” implying that the avatar with a communist symbol on its body is a violent killer. The fact that a poster with as many racist undertones as this was approved by the Students Activities Office left me with no words.

Anti-Asian American and Pacific Islander (AAPI) sentiment in the U.S. began as a form of immigrant xenophobia, with the Chinese Exclusion Act of 1882 being the only law to ever bar entry to this country on the exclusive basis of race. One can see its trajectory consistent through the ages; the horrific Japanese internment camps during World War II, the increased violence against AAPI in the past few months and throughout the Covid-19 pandemic and the media reframing dishonest statements from the Chinese Communist Party (CCP) as a blanket statement on Chinese people. This ignorance and hatred has led to a 145 percent increase in anti-Asian violence from early on in the pandemic, and the beginning of 2021 saw an even larger spike — 164 percent — in hate crimes, according to a study by the Center for the Study of Hate and Extremism.

Asian Americans have been oppressed throughout history, and in the 21st Century, nothing has changed. We are still broken.

On April 30, many of the members of the AAPI clubs at South sent an email to Superintendent Dr. Charles Johns and Principal Dr. Lauren Fagel with a demand for an apology regarding the missteps of the administration in initially allowing the poster to go up and potential future steps. Every person received an identical, formulaic email promising change and explaining why the school is delayed in creating policies without a single mention of the failure to initially police this or any mention of what direct action was to come.

What has led us to speak out on behalf of the AAPI community is the fact that there is pain and trauma being relived by people who look like and have lived like us, and the administration has failed to recognize this by providing a public apology. We are most concerned about the school’s action moving forward to make sure that racist rhetoric is clearly condemned and not tolerated so that we can create a safe and truly welcoming environment for all students. We want to be validated and humanized, while the administration has dragged its feet and refused to condemn the insensitive speech nor ensured intolerance going forward.

So, should a poster calling China “sus” be taken at face value? Were the students supposed to assume that it was posted and verified in good faith and that the only possible interpretation was disagreement with the CCP’s policies? In the midst of racial strife and political activism over AAPI lives and rights, were we to believe that the poster upheld the beliefs that the school claimed to protect? Was it too much to ask for an admission of fault and pragmatic action? It’s almost insulting to think that silence and patience is the proper response to the hatred we received.

On May 25, seven members from Chinese Club, Korean American Student Association (KASA), and Students Organized Against Racism (SOAR) met with Principal Dr. Lauren Fagel and other members of the administration, including Mark Maranto, the director of the Student Activities Office to discuss our demands for change. We gave a presentation clarifying our stance and pushed for more action. Having read our collective email on April 30 with the demands for change, the administration listened as anecdotes and explanations attempted to convey our suffering to them. After the students gave their statements, Fagel apologized to the group for the pain caused, but confirmed nothing could be done yet. The administration said that they acted swiftly after having recognized their mistake, but were vague on the process of vetting and how it would be changed going forward to accommodate our demands. She told us that changes in policy were not something she could do at her level of power, to which we responded that our only immediate demand was a public apology. She denied our request, citing that she was unable to make a statement at her level of power.

To openly ignore race when it has been an integral part of Americans’ identity and socioeconomic potential is a damaging and inaccurate portrayal of both South and America, but to not openly denounce racism that exists on a satirical level is contradictory and dehumanizing.

We don’t know when proper action limiting such future speech will take place or when we will receive an adequate response; however, we are confident in one thing: we will keep fighting.