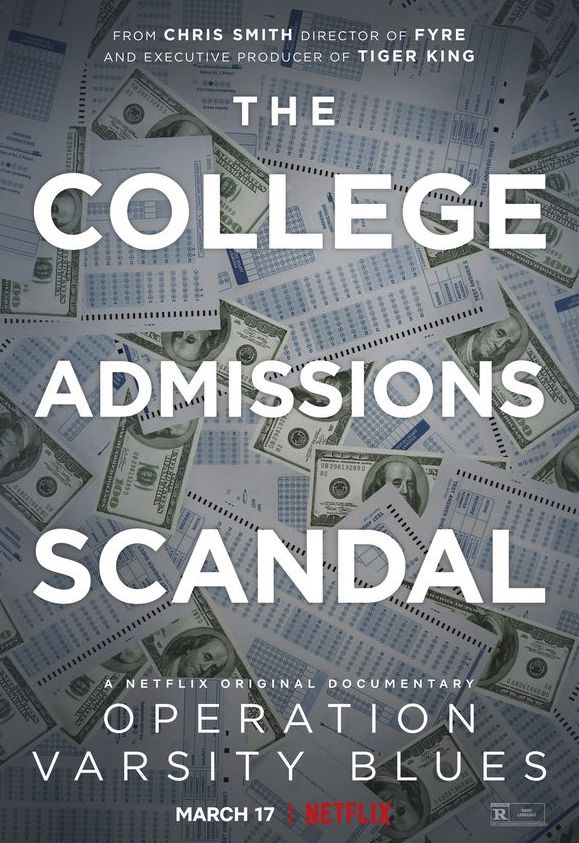 It is the end of the school year, and summer is right around the corner. Underclassmen are looking forward to the next three months of freedom, and all the seniors are graduating and preparing to leave for college in the fall.

Next year, it will be my class’s turn to apply for colleges and begin the terrifying process of deciding where we want to spend the next four years of our lives.

As I’ve begun the process of looking into different schools, a few things have caught my eye.  A few weeks ago, I watched a documentary on Netflix called Operation Varsity Blues: College Admissions Scandal. It focused on a college admissions scandal led by Rick Singer, who helped wealthy or famous families get their kids into elite universities through fraudulent methods.

The film brought a few things to my attention. Mainly, it highlighted how corrupted the college admissions process can be. Many top tier colleges are willing to accept donations from wealthy families who in turn are allowed admission into the school; this is referred to as the “back door” admittance in the documentary.

The documentary focused on wealthy families who would pay to change their children’s standardized testing scores or lie about being an athlete in order to gain admission, which was commonly referenced as the “side door.” Meanwhile, the rest of the students who do not have access to such privileges are fighting for admittance in the “front door”: getting in through merit and honesty.

Although many of the families and administrators who cheated or bribed their way into these universities were caught and punished, they are not the entire problem- the colleges are. The documentary ended with the fact that these schools have denied the claim that any money or donations can help gain admittance.
As people continue to pay their way into certain colleges, it increases the amount of competition for everyone else applying, and therefore leads to a more toxic and competitive application environment. The widespread demand for admittance into these so-called prestigious schools have created an unrealistic, extremely competitive environment for students attempting to gain access. The seemingly impossible expectations being set by these schools lead to high anxiety and stress in students. Someone can have all the necessary credits and more, and yet still be denied.

Meanwhile, other wealthy, privileged students are able to pay their way into a spot, and the many qualified and fully academically capable students are sidelined due to their lack of connections or wealth.

I have seen many of my classmates bend over backwards to make sure they have enough extracurriculars, enough AP classes, enough volunteer hours. And yet they still did not get into these schools. What else could they possibly do?

Our drive for recognition and status has also contributed to these unrealistic college admissions standards. Students often have a set idea that a certain college is best for them and the only school that they will be able to succeed or be happy in. There can be many good fits for a given student, and not all of them are necessarily considered an elite or highly selective school.   This mindset of having to be the best or most involved solely in order to get into prestigious schools is harmful to many students’ mental health, and is something that needs to change. While most of the nation is competing fairly and is stressed with these unrealistic standards, some privileged students are just paying to get into college.

A shift in perspective may greatly decrease students’ stress and anxiety over being accepted into an elite school, and may prevent the next college scandal.

It is concerning that some colleges are willing to prioritize students who can bribe their way in rather than admit deserving and hard working students who can’t afford such privileges. These institutions are where thousands of people go to get a good education. Yet the lesson prospective students can take away from this process is that immoral actions are fine as long as it is backed up with money.

The idea that there is only one school out there that is right for someone is false and dangerous to many people’s mental health.  Colleges may advertise that their school is the best, and you can only get the success and education that you desire by attending that particular college. However, this is not always the case. There are more than just a handful of schools that will allow you to get the best possible education. Attending an Ivy league or well known university is not what is going to make someone automatically successful in life.

This mindset of needing to attend a prestigious school in order to succeed in life needs to stop, as it helps spin the continuous cycle of college corruption. The more prestigious a school is viewed, the more people that will apply, and the more money people are willing to pay to gain admittance. We need to realize that just because a school is less well known does not mean that it will not give the same amount of opportunities that an elite school can.

The pursuit of money and social status should not be prioritized over education. And the first step in decreasing this corruption in the college admissions is to have the schools admit their part in the problem. Then maybe we can begin to actually see what all these schools claim they value so heavily; knowledge and truth in the education system.