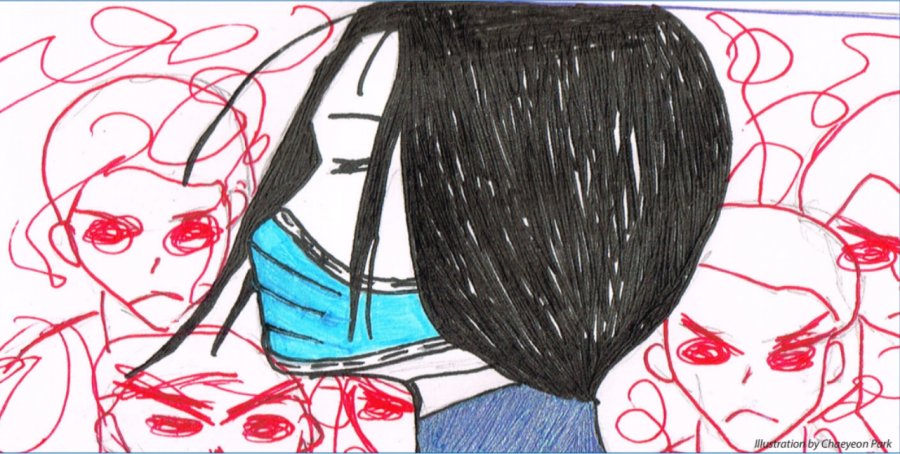 Walking through the hallways of South at the start of second semester, senior Hiroki Imura was told “not to get close” by students passing by. While attempting to do laundry, freshman Sabine Lee’s mother was harassed by a woman who accused her of having the coronavirus. In nearby Naperville, a Chinese man was attacked by two women who threw a log at him, spat at him, accused him of having the virus and told him to go back to China, according to WBEZ Chicago. Racially-motivated hateful acts against Asian Americans like these have significantly increased since the onset of the COVID-19 pandemic.

From March 19 to May 13, the STOP ASAIN AMERCIAN PACIFIC ISLANDER (AAPI) HATE reporting center—an organization in which people can report instances of hate as a result of COVID-19—received over 1,700 reports of COVID-19 discrimination from Asian Americans in the U.S.

The virus originated in Wuhan, China, and spread globally through person-to-person contact, according to the Centers for Disease Control and Prevention (CDC). Senior Olivia Lee believes that because the virus originated in China, many people blame the entire Asian American community as a way to deal with the uncertainty of the current situation. She also believes that the pandemic gives people a way to express pre-existing anti-Asian sentiment.

“[People] want an easy scapegoat for someone to blame and the easiest thing to do is to blame China and to blame Asian or Chinese people, because that’s where the virus started,” Lee said.

Junior Hannah Jon believes that there is a misconception that Asian Americans don’t face discrimination due to the “model minority myth” – a stereotype that Asian Americans achieve a higher-than-average degree of socioeconomic success. This misconception, Jon said, leads to a lack of awareness about the impacts of COVID-19 on Asian Americans and perpetuates the rise in hateful incidents seen since the beginning of the pandemic. Similarly, Susan Flickinger, social studies teacher, believes that the lack of awareness and misinformation has made national leaders and the media unwilling to discuss hateful acts.

The Oracle editorial board encourages South students and staff to educate themselves on the racism directed towards Asian Americans surrounding the COVID-19 pandemic and to seek fact-based information about the virus.

Jon feels that spreading awareness about the backlash facing Asian Americans is the best way to combat it. She uses social media to inform people of instances of racism and educate others on the impact of certain actions and words.

“Since we can’t leave the house or do much, [using social media] is the one way I’ve been trying to say it’s not okay to, for instance, call coronavirus the ‘Chinese Virus,’” Jon said. “The little things of raising awareness are really what I think I can do in this situation.”

The Oracle editorial board supports these actions and suggests that the South community continue to seek information. English Teacher Jen Jun noted that although there isn’t a one-step fix to solving racial biases, educating oneself is an important first step in creating an equitable culture. Jun recognizes the importance of discussing these topics, not only through social media, but in the classroom as well. She feels as though discussions will allow people to build their empathy and work towards improving the status quo.

“Words matter,” Jun said. “Realizing the connotative weight of language and adjusting your everyday language can help shift stigmas. Many people make jokes surrounding the coronavirus to lighten the situation, but there’s a fine line between witty humor and using another person or group of people at the expense of a cheap joke.”

In addition, Flickinger finds it crucial that the South community is aware and responsive to peers. She urges people to report witnessed acts of hatred and feel empathy for people.

Along with the pandemic, the racism has added a level of anxiety for many Asian Americans. The Oracle editorial board urges people to seek factual information about the virus and use appropriate language that does not target a group of individuals.