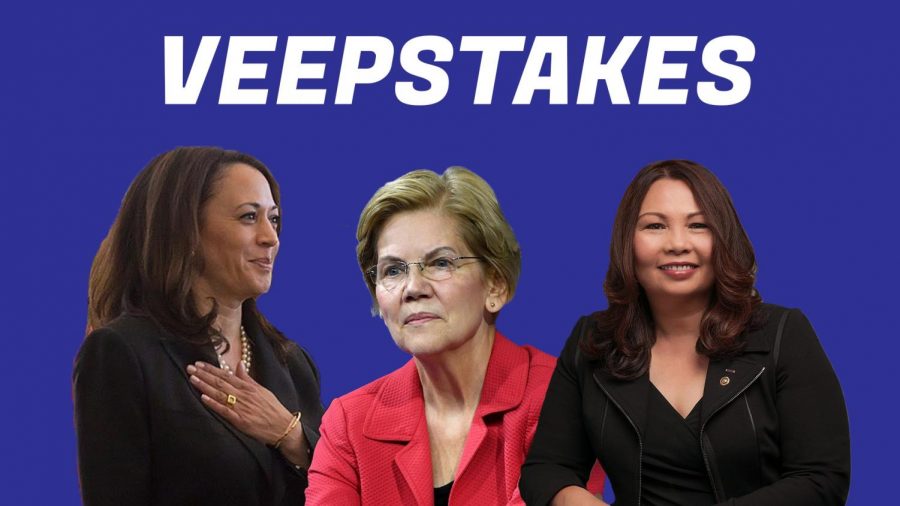 There’s something Selina Meyer wants you to know: “Being Vice President is like being declawed, defanged, neutered, ball-gagged, and sealed in an abandoned coal mine…! It is a fate worse than death.”

Suffice to say that Meyer, the titular character of the HBO series Veep, is not a fan of being second-in-command. Most politicians aren’t, as evidenced by the 30 major candidates who ran for the top office this year. But someone has to do it, thanks to the Constitution, and now that Joe Biden is the presumptive Democratic nominee, the time has come for him to pick a running mate. Biden has already committed to putting a woman on the ticket, but the name underneath his on November’s ballot is still very much in the air. As the world around us continues to crumble under the weight of a pandemic, let’s play the Veepstakes and take a closer look at the women with a chance to be the 49th Vice President of the United States.

First up is Stacey Abrams, former Minority Leader of the Georgia House of Representatives and candidate for Governor in 2018. Abrams has been making headlines as of late, most prominently last week’s New Yorker feature entitled, quite baldly, “Why Stacey Abrams Would Like to Be Vice-President,” as she publicly jockeys for the vice presidential nod. However, her lack of experience and very public audition for the role have put off some Democrats and ultimately, her nomination is unlikely.

While Abrams just barely missed out on a gubernatorial victory, two newly elected governors may be occupying a different executive office next January. Both Michelle Lujan Grisham of New Mexico and Gretchen Whitmer of Michigan have found themselves as subjects of vice presidential speculation; both have reaffirmed that they are quite satisfied where they are.

Several other possibilities can be found in Congress— three in the Senate, one in the House of Representatives. Sen. Catherine Cortez-Masto has been floated as a possibility; the first Latina in the Senate and a Nevada native, she could ostensibly lock down her swingy state and inspire turnout among Latinos in the crucial battlegrounds of Arizona and Florida. But according to CBS News, she may not want the job, and tapping her could endanger a key Senate seat. Similarly, nominating Sen. Tammy Baldwin to energize progressives and make history as the first openly gay person on a major party ticket would also risk her Wisconsin Senate seat. Just south of Baldwin in Illinois, Sen. Tammy Duckworth is another possibility. While the Iraq War veteran who lost both of her legs in combat has a compelling personal story, Duckworth’s limited national presence might make it hard for her to break out onto the national stage. Florida Rep. Val Demings may have a similar problem, but as a black woman, former police chief, and swing state resident, she checks enough boxes to become the only Representative in this year’s Veepstakes.

But Biden’s most plausible vice presidential candidates come from the slate of women who ran against him for the Oval Office. Sens. Kamala Harris, Amy Klobuchar, and Elizabeth Warren all have credible claims as to why they should be on the ticket.

Klobuchar hails from Minnesota, a state Donald Trump nearly won in 2016, and could assist in flipping the all-important Upper Midwestern states of Michigan, Pennsylvania, and Wisconsin. Her platform of liberal pragmatism brought her much further than was expected in the primary campaign, and she publicly endorsed Biden the night before his Super Tuesday sweep. In an email to supporters, Biden openly touted her as a possible running mate.

Warren, while residing in the already liberal bastion of Massachusetts, could increase turnout of progressive voters and bridge the growing divide between the left and the center of the Democratic party. Her progressive policy positions, including a two percent wealth tax and bankruptcy reform, have polled well among Democrats as well as the general electorate, most recently in a Reuters/Ipsos poll showing 64% approval of the former proposal. While her relationship with Biden has never been smooth sailing, he has begun to embrace some of her policies following the suspension of her campaign.

But Warren and Klobuchar, as well as Whitmer and Baldwin, have a problem: their nomination would result in an all-white ticket. This could be seen as a thumbing of the nose to the many people of color in the Democratic electorate.

Which brings us to Kamala Harris, a senator from California of mixed Indian-Jamaican ancestry. Since being elected in 2016, she has become a rising star in the Democratic party, her prosecutorial background lending itself to fiery questioning on the Senate Judiciary Committee. Harris briefly entered the top echelon of primary candidates in June after attacking Biden’s opposition to bussing, but her star quickly faded. Harris’s presidential run ended quite abruptly last December, before any primary ballots were cast. Despite this, Harris brings with her the ability to turn out black Democrats in a way Hillary Clinton could not, and in the cities of Milwaukee and Detroit, this could make or break Biden’s quest for the White House. Her nomination could also be a poignant gesture; after disastrous showings in Iowa, New Hampshire, and Nevada, black voters in South Carolina revived Biden’s campaign just in time for his Super Tuesday sweep. Many black voters feel they have earned representation on the Democratic ticket come November, and Harris may be Biden’s answer.

But out of all of these politically-savvy and intelligent women, only one will take the balloon-strewn stage with Biden at the Democratic National Convention. (That is, if there is a stage at all.) In the coming months, the shortlist will be narrowed until, at last, the running mate is announced. Ultimately, it will depend on what the Biden camp is looking for. If they want to give progressives a seat at the table of the Democratic party, he may pick Warren. If he wants to draw a contrast between his ticket and Trump’s, Duckworth’s military service may offer such a platform. Ultimately, Harris seems to be the most likely pick; an attempt to return to the coalition that swept Barack Obama into the White House more than a decade ago.

For such a disliked office— John Nance Garner, former Vice President to Franklin Roosevelt, once said it was “not worth a bucket of warm piss”— there is a wide array of Democrats jockeying behind the scenes in the 2020 Veepstakes. And whoever ends up gunning for the residence at Number One Observatory Circle, rest assured that Biden will have a capable and qualified woman by his side.