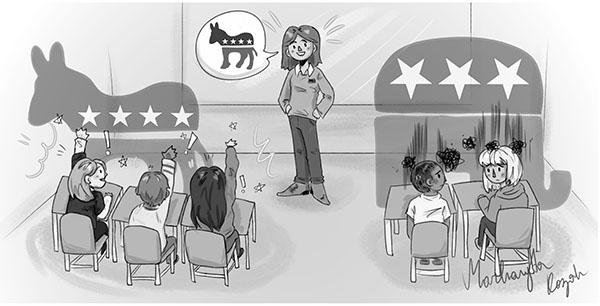 While most students initially focus on the structure of their essays and the amount of times they participate in discussions, others focus on concealing  their political identity.

Students suppressing their political views in order to maintain their grade is not unusual. People with conservative views, such as junior and Conservative Libertarian Colin Morse, find it difficult to voice them.

Morse mentioned that the majority of teachers seem liberal while the political views amongst students tend to vary. Similar to Morse, Krista Fenetre* believes that there is a common misconception about conservatives.

“There’s a misconception in what it means to be a conservative because you can believe in an array of different things,” said Fenetre. “One thing I feel both sides agree on is that you want to be accepting and that you should know both sides of the story.”

Political discussions from elections to human rights are usually brought into English and History classes as they pertain to the curriculum. In class, when particular topics are brought up, Morse stressed that his expression of his beliefs depends on the teacher.

“I always stay quiet in class discussions because I do not want to accidentally say something that people would get upset about,” said Papillon. “It’s easier to stay out of the conversation.”

Both Papillon and Morse have altered their opinions in essays or presentations to avoid the possibility of receiving a lower grade.

“When you know a teacher has power over something as important as your grade, it can definitely make it impossible for you to want to share your true views,” Morse said.

Fenetre expressed that it’s difficult to speak about politics within history classes when all sides of the political spectrum aren’t integrated.

“I think we need to come together and not make it difficult to voice your first amendment right of freedom of speech and that’s what I want to advocate for,” Fenetre said.

As there is no direct rule against teachers speaking their political views, some choose to vocalize their opinions while others decide to keep them out of the classroom. For instance, history teacher Jerry Fogarty does not share his political views, and he knows his conservative students won’t express their opinions.

“[My] classroom should be a place where students come together and learn about the history, the best that I can teach it,” Fogarty said. “I want them to be able to [think  critically] without thinking that they think can’t think certain things because they might offend me.”

The Oracle editorial board suggests that the implementation of a unit in Civics courses where students learn how to have respectful conversations with people of opposing political beliefs. Teachers should moderate these discussions and demonstrate how to be open to all sides of the political spectrum. Additionally, educating students to finding direct evidence to support their beliefs will foster more informed discussions.

Fogarty stressed the importance of discussions between people with opposing political views. Even though the country is polarized, these discussions create personal growth.

“[Teachers] should help students know that the academic environment is a place you can share ideas whether you agree with them or not,” Fogarty said. “I think part of maturing intellectually is learning how to handle yourself when confronted with individuals who have different ideologies.”