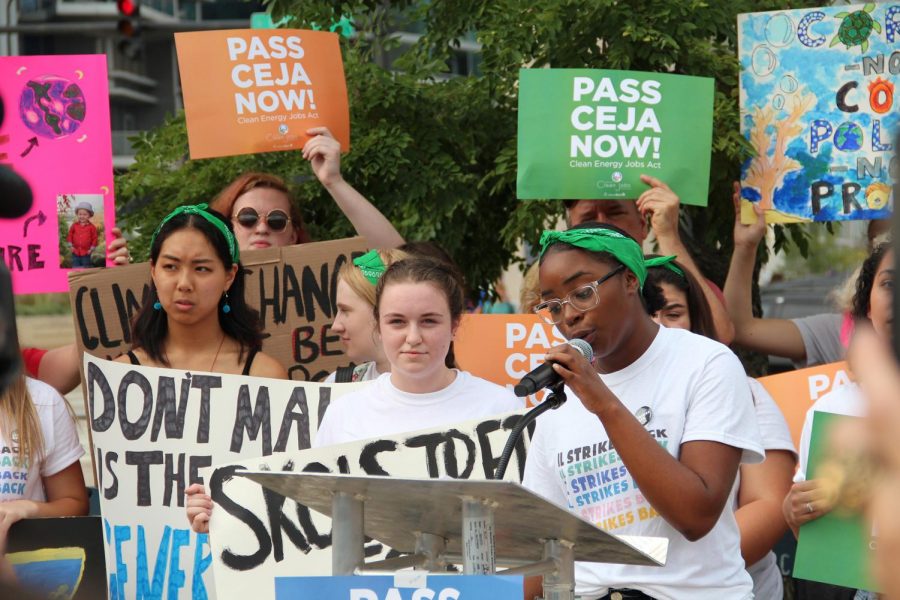 Valiant Voices: Delivering a passionate speech, a young woman stands in front of an enthusiastic crowd while students around her silently protest with impactful signs. Students from across the Chicagoland area gather to partake in Evanston’s climate strike, which took place on Friday, September 20. Photos by Gwyn Skiles

“You have stolen my dreams and my childhood with your empty words… I should be back in school… We are in the beginning of a mass extinction, and all you can talk about is money and fairy tales of eternal economic growth. How dare you!”

These are the words 16-year-old, Swedish environmental activist, Greta Thunberg, preached to world leaders at the United Nations climate action summit in New York on September 23. In her speech, Thunberg expressed the anguish many youths feel towards the lack of government-initiated climate justice. This frustration has been expressed in student-led protests around the world.

On September 22, thousands of students skipped school to participate in the Illinois Youth Climate Strike. There, they marched through the streets of Chicago, carrying signs painted with the words, “You are stealing our future” and “You’ll die of old age, we’ll die of climate change.” Among them were several South students.

As time ticks by, Generation Z finds itself bequeathed with the task of defeating climate change. Threats of the planet reaching extinction in the near future make the government’s ignorance of these concerns even more frustrating, especially because many youths are unable to vote for officials who seek climate justice.

When an opportunity, such as the Illinois Youth Climate Strike, presents itself, youths are provided the opportunity to pressure the government to take measures of preservation. Yet, most Generation Z students pass on protesting for their future to avoid getting written up for an unexcused absence from the school they attend.

The Oracle Editorial Board urges District 225 administration to encourage youth activism and allocate time for students to protest, lobby, and explore their political beliefs.

Several students neglected to attend the recent strike in order to avoid an unexcused absence, Aidan Lane, senior at New Trier High School and Finance Director of the Illinois Youth Climate Strike explained. Lane mentioned that the Illinois Youth Climate Strike called several Chicagoland schools urging to excuse absences for students who attended the strike, yet found these schools to be noncompliant. Glenbrook South was one of those schools.

“We tried to contact public schools [in Chicago] and have them excuse kids,” Lane explained. “They just said they were working on it but they didn’t do anything by the time of the strike. It’s hard skipping class to go to the climate strikes, but it’s important because we’re not going to have a future if we don’t save the environment.”

The Oracle Editorial Board advises the administration to excuse students who participate in political endeavors such as the Youth Climate Strike to encourage students to develop their political voice.

Awareness spread in schools about issues such as the current climate state is not enough to inspire great change, AP Environmental Science teacher James Glynn stressed. Glynn emphasized how discussions in class about climate change may remove ignorance to the problem, yet provides only a small solution. Thus, it is vital that students have other outlets available to them to inspire greater change.

“[Climate change] is a relatively complicated issue and just to devote a class or two to it would not give it its due justice or attention” Glynn said. “[My AP Environmental Science classes] don’t generally focus on individual actions because ultimately, in this particular instance, it’s going to take governmental if not international cooperation to make any sort of change.”

The Oracle Editorial Board believes it is the responsibility of the school to empower their students. By allocating time for students to share their voices and pursue their political interests, Glenbrook South would empower their students to become active citizens and to pursue passionate endeavors. Senior Sarah Williams attended the Youth Climate Strike, and left feeling determined to seek climate justice.

“The strike definitely made me feel empowered and like I was out there making a difference,” Williams said. “I was doing more than just making changes in my life to help the environment, I was actually fighting for policy change and policy action.”