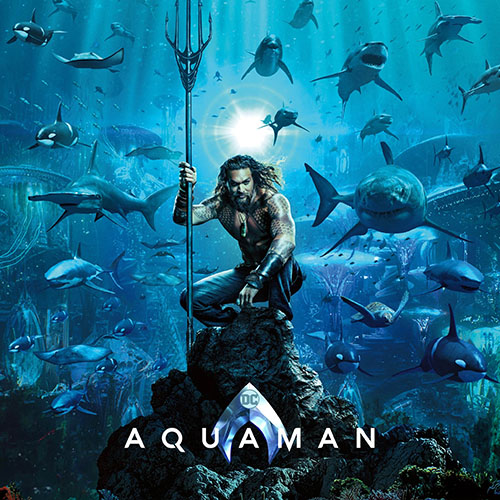 From Man of Steel to Batman v Superman to Justice League, DC films often fall flat in terms of plot and characterization. That’s why when Aquaman splashed into the mix, I wasn’t sure what to expect. Despite DC films’ tendencies to flop and the fact that Aquaman is often seen as a lame superhero, Aquaman is the top pre-seller of tickets worldwide. Surprisingly, the sales were right: the film’s creative details and environmentally conscious plot created a pretty entertaining film.

This film told Aquaman’s (Arthur’s) origin story. Basically, Aquaman’s mother, Atlanna, married a human and together they had a son. Atlanna was then forced back to Atlantis because humans and seafolk are not supposed to mix, leaving the father to take care of the son of two worlds: sea and land. The film then shifts to present times where Arthur is older; his technical half brother has become king of Atlantis and is trying to wage war on the land. Mera, a citizen of Atlantis, recruits Arthur, the true heir to the throne, to come to Atlantis and stop him.

Although this film was not the greatest superhero movie, I thought it was enjoyable. It was definitely unique from other current superhero films because it is the only one with a world in the ocean, giving the writers and directors a lot of creative freedom. For example, similarly to how knights ride horses into battle, the kingdoms of the sea used seahorses and sharks.

This film was also creative in its inclusion of the underlying message about pollution in the sea. The reason the Ocean Master, Aquaman’s half brother, wanted to wage war on land was because of the way humans treat the ocean, and the attempt to relate the film to a current environmental problem made this film easier for audiences to connect to. A lot of times, fantasy movies lose sight of reality, but this film incorporated real world problems into the plot. This allowed the film to have a deeper meaning than meets the eye.

Overall, Aquaman was surprisingly a pretty good movie. Although several moments of the film contained poor CGI, especially the big ocean fight scene towards the end, and some parts of the film were slow, the story was interesting and included some great characters. I would say that Aquaman floats to the top of the DC movie leaderboard alongside the highly acclaimed Wonder Woman.