How scandal and corruption haunt the NCAA 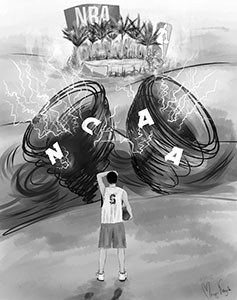 Scandal Storm : NCAA players have faced trouble regarding eligibility, enrollmet, and the profesional draft. The NCAA’s new rule changes look to smooth out transitions and add flexibility to the decisions of student athletes. Illustration by Margo Kazak

On Aug. 8, an article titled “Flexibility for going pro and getting a degree” was published on the NCAA’s official website detailing new standards for how college basketball will be run. Rules include letting high school and college students hire agents and letting players that go undrafted in the NBA Draft to return to college. This is no doubt landmark legislation for the scandal-ridden NCAA, but these changes come with giant asterisks that will make the changes less effective than some think.

There is no denying that the NCAA needed to make some changes to how their organization is run. Scandals have hit the organization, and just recently FBI raids uncovered numerous payments by agents to college basketball players, which is strictly against the NCAA’s amateurism policy. After seemingly taking action with the new    changes, the public gave the NCAA some rare positive press.

The new rulings by the governing body over U.S. college sports are centered around new specifications on agents, allowing men’s college players to hire agents depending on an evaluation from the NBA Undergraduate Advisory Committee.

In addition, the rules would allow “elite” high school prospects, as identified by USA Basketball, to hire agents if the NBA modifies a rule that prevents high schoolers from entering the draft. Let’s talk about why the NCAA is still really bad at their jobs.

First, the two above rulings largely depend on action from the NBA and USA Basketball, so it is nice to see the three most important basketball organizations in the U.S. working together, right? Nope. The NCAA reportedly did not alert either of the two organizations about the new changes, let alone that they were roped in, and the NBA and USA Basketball didn’t know these changes involved them until the NCAA’s rulings were public.

The rule concerning high schoolers is dependent on the NBA changing the one-and-done rule, which prevents high schoolers from entering the draft. There has been talk of this happening, but the earliest the rule could be changed to 2022.

There is no guarantee that the one-and-done rule could be repealed at all, because we cannot be sure that the NBA would want to make that change.

These were not the rule changes the NCAA needed. They really do not do much and just make a lot of the NCAA’s fanbase upset. The traditionalists don’t want any change and those who want reform want more change than what’s been implemented.

A better change that many others have been asking for would be to allow athletes to benefit from them being athletes. Currently, players can’t do as much as accept a candy bar from a fan without being susceptible to suspension by the NCAA  if the NCAA believes that the candy was gifted because of the player’s fame.

The change I propose would allow the best players to make money in exchange for the money that the NCAA is making off of them. This would let the NCAA avoid a wage for every one of the numerous athletes competing in Divisions I, II, and III.

Despite this, the NCAA did what they did and made a good PR move in the short term, but failed to address long term issues.