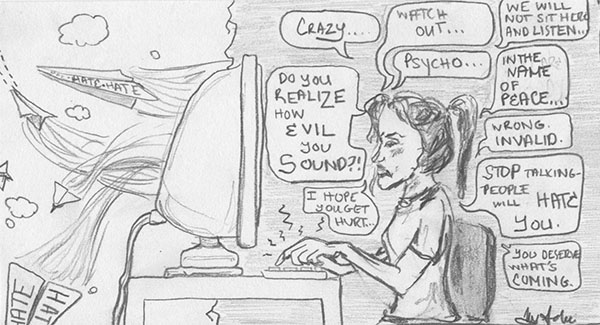 Earlier in February, a misogynist blogger named Daryush Valizadeh published an article on his blog, “Return of Kings”, detailing why he thinks rape on public property should be legal. He had planned an international meetup day for “Return of Kings” readers on Feb. 6, only to later cancel the meetup after he received numerous violent threats, according to an ABC News article.

Oh, so people who are against violence chose to demonstrate that by… threatening violence.

I was disappointed with this news. Not because I agree with Valizadeh’s beliefs, but because opposers of his message chose to combat his intolerance with even more intolerance. Actions that come from a place of hate in the name of peace are not the same as simply spreading peace.

Unfortunately, I was not surprised by the reaction of Valizadeh haters. I found this situation to mirror the “Great Cecil the Lion Controversy” of 2015, when a treasured lion was hunted illegally by an American trophy hunter, Walter Palmer, according to an article written for CBS. Palmer’s house was vandalized, his business was damaged and he and his family received numerous death threats after he killed the lion.

I’m going to go out on a limb here and propose that cyberbullying people whose values go against yours is still—get this—cyberbullying. You can’t just threaten to kill someone’s family because you disagree with what they believe, even if that belief is something as shocking to you as legal rape. I’m no history buff, but from what I’ve observed, telling people “what you believe is wrong” has never really worked out in the past.

The problem is that our media allows us to put people into boxes. Guys like Valizadeh and Palmer are the “bad guys” and that’s that. Their names become tarnished, forever known as that “pro rape loser” and that “psycho lion killer”. We forget that even the people we don’t like are, oh yeah, people too.

What our media fails to realize is that the people we attack are only faces of an ideology, not the ideology itself. Attacking Valizadeh will not end misogyny, and attacking Palmer will not end trophy hunting. It just won’t.

I feel as though people have begun to expect immediate reparations for things like ideas and lifestyles, things that can not be immediately undone or corrected. This generation has forgotten that forgiveness is not most powerful after an apology but rather when there is no apology at all. We have forgotten that loving the people who have offended you is powerful, that peace is powerful.

A family friend of mine mentioned that she was at a peace march downtown, and the people marching were shouting “the Chicago police are the KKK dressed in blue”. Sounds peaceful. My question is, why not just call that march what it is, a protest, instead of using peace, the name of a sacred value, to cover up hate and anger?

Peace is not angry. Peace is not mean. Peace does not threaten or shout or yell or scream or come from a place of hatred. Peace is peace. It is forgiveness, understanding and compassion.

I think that when we are confronted with ideas that seem offensive, the best way to handle those feelings is to remain reasonable and respectful. But how do you do this when your entire lifestyle has been degraded, questioned and disrespected?

Put yourself in the position of the person who believes in the ideology you disagree with. Though it may seem wrong to you, that person probably can explain to you why they believe what they believe.

I took the liberty of doing this in response to the “Return of Kings” scandal. I had seen posts on Facebook urging young women to “Be safe!” and “Don’t go out alone!” on the day of the reader meetup. These posts were clearly made out of fear, for anyone with access to the internet could go to Valizadeh’s blog and see that women walking along the street were not in danger.

“I knew from an early age that rape was bad, as was all forms of violence, not just against women but men as well,” Valizadeh says on his blog. “If rape becomes legal under my proposal, a girl will protect her body in the same manner that she protects her purse and smartphone. If rape becomes legal, a girl will not enter an impaired state of mind where she can’t resist being dragged off to a bedroom with a man who she is unsure of—she’ll scream, yell, or kick at his attempt while bystanders are still around.”

Obviously I still disagree with his argument; however, a quick skim of his article eliminates the fear that on Feb. 6 all of womankind was at risk for being brutally and legally raped.

Okay, but what are you supposed to do if you understand the person’s viewpoint and still think their ideology needs to be altered? Write a letter. Host a debate. Participate in a protest where the signs read exclamations of peace instead of exclamations of anger. Find a way to express your side in a positive way. Any and all of these actions are more powerful than sending death threats via the internet. Peaceful words are powerful.

Maybe I’m a dreamer, but I will always believe that peace is more powerful than hate. I think that civil rights activist AJ Muste summed up this belief well when he said, “There is no way to peace­—peace is the way”.