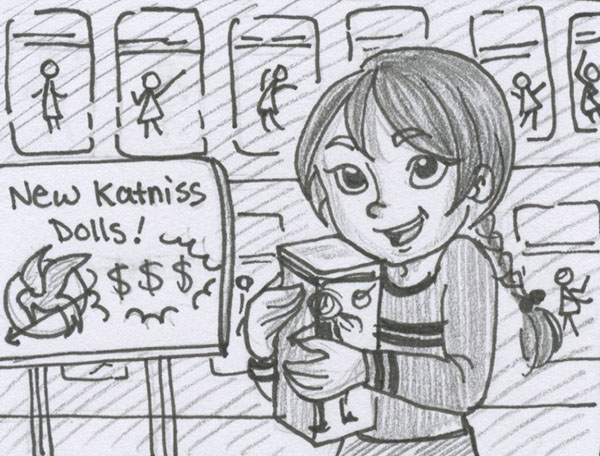 What do Harry Potter, Holden Caulfield, Gandalf and Captain Kirk all have in common? They’re all male protagonists.

But where are the female protagonists?

On the big screen, women are not stars. Typically, they’re the love interests or the supporting character of a bigger man. They’re sources of romance, not action. They’re the people in the background, not the front-center hero. Men are the protagonists, not women.

But for the first time in history, entertainment is presenting women as something more.

From Imperator Furiosa in Mad Max: Fury Road to Rey in Star Wars: The Force Awakens, 2015 was rife with new female lead characters. I’m talking about Katniss Everdeen from The Hunger Games and Ava from Ex Machina. Even Game of Thrones’ Daenerys Targaryen fits the bill.

These are women who are playing roles normally filled by men.

They’re women who have taken hold of their destiny. They’re the warriors and champions, heroes and rebels, not just sidekicks and love interests. They’re the main characters, the centerpieces around whom the story revolves.

Get where I’m going here?

Hollywood is changing, but are we as a society willing to follow? Currently, the answer seems to be no.

When toys for the popular Avengers: Age of Ultron released, Black Widow was curiously missing from the action figure sets. When Hasbro released their Star Wars Monopoly set, Rey’s figure was replaced by Darth Vader (who doesn’t even appear in the film). When mothers go shopping for their child’s clothes, they ask for a Mad Max t-shirt without Furiosa on it. Is it because a lady hero is too weak for your male son?

Rey’s figure eventually came to the shelves only after the #WheresRey campaign gained attention. Disney’s response? According to an article written in Forbes, they were keeping it “under wraps” to surprise the fans. Right, because releasing a toy after an angry campaign made of upset fans really screams “surprise factor” to me.

As a society, as a community at South, I ask that this not be us. That for our girlfriends, sisters and daughters, we take on this new trend and begin to see women as more than just romantic interests.

There are little girls in our community who enjoy swords over princesses or spaceships over horses, and these girls need role models. What’s going to happen if we don’t support this trend? Are we really going to push these girls into a corner of peer pressure and force them away from what they love?

Are we going explain to them that men rule the world and not women? Are we building women who call themselves confident and strong or limit themselves as side characters and romantic interests?

If we show our women as side characters, then that’s all they’ll amount to: side characters. But today, women are taking to the stage. Isn’t it time we give them the spotlight?