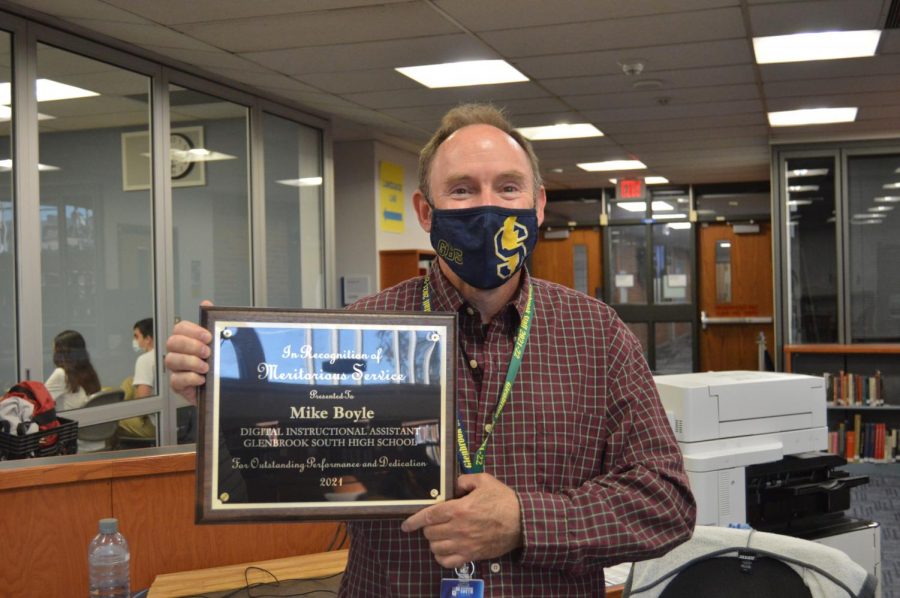 Amongst countless books and studying students in the library, Mike Boyle, head of the Chrome Depot—a resource for technology troubles—and World Language Lab, hunches over a student’s malfunctioning Chromebook, facing yet another day in the office.

This past spring, Boyle received the Recognition of Meritorious Service Award, in acknowledgement of working at South for the past 28 years, Head Librarian Christi Shaner said. She nominated Boyle for the award, and believes that his kind attitude and extensive time spent serving South’s community deserved appreciation.

“When I was asked about Mr. Boyle possibly being nominated for the award, I was in total agreement,” Shaner said. “His positive attitude is my favorite attribute, and I know the students and staff appreciate it as well.”

Despite now being located in the library, Boyle recalled spending the majority of his time at South working in the Math Department as a lab manager, where he updated computers and assisted classes in the lab. However, once the lab manager role closed, he spent the next couple of years working in South’s Maker Space and World Language Lab. In 2018, Boyle moved positions into the library to permanently run the Chrome Depot and World Language Lab.

“I started out as a part time lab manager and figured I would do it for a few years, but then the position went full-time,” Boyle said. “I loved the people and every department I have been in, so I’m still here 28 years later.”

After moving positions, Boyle finally discovered that being in the Chrome Depot and World Language lab was where he most enjoyed spending his time.

“I would like to thank Christi Shaner and everyone in the library for making me feel so welcome, it really is like a family here.” Boyle said.

Boyle explained that when he heard his name being called out to receive the Recognition of Meritorious Service Award, he could not believe it.

“I was seated in the auditorium during our Glenbrook Day celebration at the end [of last] school year when my name was called,” Boyle said. “Honestly, I was totally shocked and a little embarrassed to go up to the front to receive my award.”

Shaner, who has been the head librarian at South for 13 years, believes that Boyle was the right person to receive the award.

“He makes the library a pleasant place to visit, and he comes to work every day with a smile on his face,” Shaner said. “He tries everything he knows to help our students and staff with their technology issues, but if he does not have the answer, he will search until he finds a solution.”

Librarian Lauren Gruber, who has been working at South since 2015, explained that she has gotten to know Boyle over the past few years, and appreciates his devotion and dedication in the library. Gruber remarked that one of her favorite moments from last year was when she heard that Boyle had received the award.

“I was excited for Mr. Boyle because he is such a dedicated member to the GBS staff,” Gruber said. “He’s kind, helpful, and his involvement at our school goes way beyond his job description.”

Boyle explained that he has no plans on stopping, and hopes to continue to assist students and staff in the library for the next few years before retiring.

“[I have] no plans for the future,” Boyle said. “I would like to continue working in the library until I retire, probably within the next five years. I would like to make it to 30 years.”