Pep club works to bring spirit to all activities 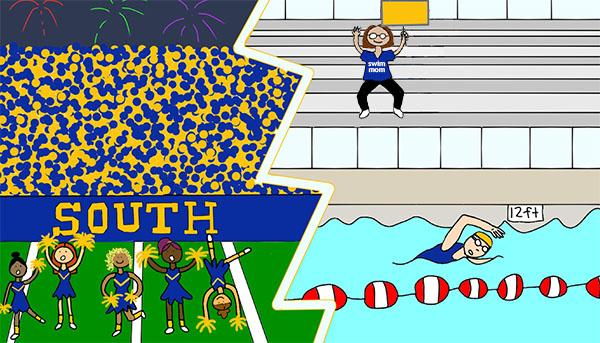 Although South has always had spirit days and events in the past, compared to other schools, South seems to lack school spirit overall, according to senior Ela Redlinska, a Titan Nation leader.

Redlinska gave the week leading up to homecoming as a prime example of said lack of spirit, for not many people participated in the dress up days.  Overall, school pride was not exhibited,  Redlinska said.

“I think [some students] think it’s lame,” Redlinska said. “I think they think it’s a ‘too cool’ type of thing. I also think it depends on the person. Some people are like ‘I don’t want to do that’, and others are like ‘this is really cool, it’s only our four years of high school, let’s do it.’”

Large schools such as South typically struggle with school spirit, according to Sarah Davis, science teacher and Titan Nation co-sponsor. Rather than having a ton of school spirit overall, there are only a few groups of students who exhibit pride towards their school, according to Davis.

“We don’t see a lot of blue and gold on Fridays,” Davis, said. “We don’t see kids staying for the full football game or really supporting other things besides their sport or club, or their really good friend’s sport or club.”

“Everyone goes to football games on Friday nights, but not everyone goes to soccer games or field hockey games or tennis [matches],” Graves said. “We’re trying to get bigger crowds to come to those games because I think it’s important that we let our student athletes know that as a school, we support them. We want to spread that positive attitude.”

Titan Nation leaders successfully increased football attendance by offering different incentives. Unlike past years where there was low attendance at away games, 400 students attended the GBS vs. GBN football game. They will continue to present new incentives during sporting events in order to increase spirit, Graves said.

“At most of the games, we’re going to continue to do raffles,” Graves said. “If you bring a poster, you can get a GBS headband or a gift card, or something like that.”

Contrary to what most think, Titan Nation is not just the eleven leaders in the front rows of football games, according to Redlinska.

“Titan Nation is all of us- the whole student body,” Redlinska said. “Titan Nation leaders are people that try to get them more excited and even more hyped.”

School spirit is not just found in the crowd of blue and gold in football stadiums on Friday nights, but also in smaller clubs and activities where students form friendships and find value in each other, according to Josh Koo, director of student activities.

“I think [school] spirit is not just all ra-ra, it’s a sense of community and togetherness,” Koo said.

Davis hopes to see more spirit not just towards sporting events, but towards the drama program and the music program too so that they can gain support as well.

“I would love to see kids show up and support their friends who are competing in a band competition,” Davis emphasized. “The biggest thing is that we are all parts of a whole. I think when you support other people, you are not only supporting them, [but] you are [also] creating a better environment for yourself.”